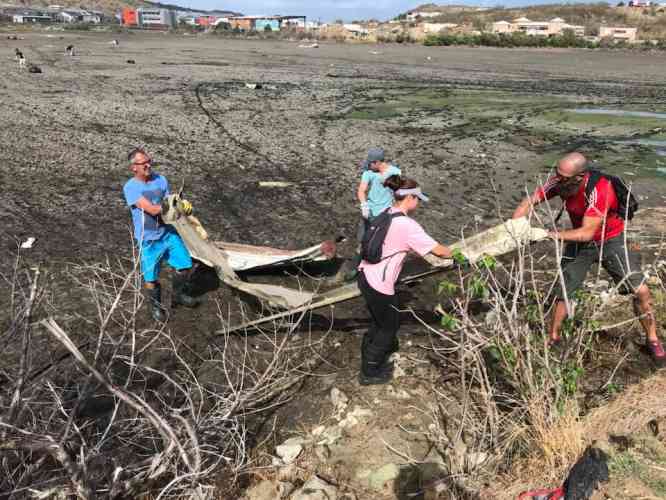 Clearing debris from one of the dried-up ponds.

MARIGOT–Clean St. Martin is an association that may not be so well known on the Dutch side, but it is very active on the French side, having undertaken numerous clean-up projects, along with other groups, since the passing of Hurricane Irma.

Clean St. Martin was initially just a Facebook group created in 2015 to encourage people to collect and take pictures of trash they were seeing in the streets or on beaches. At that time some occasional clean-up initiatives were also proposed.

The young association was formed about two months ago and has about 20 members. At least two of the board members were born and raised on the island.

After Irma, a first group of members planned four more consecutive clean-ups in Hope Hill and Le Galion with the participation of another group, Vlassia. After that, as no other clean-ups were organised it was decided, along with Vlassia to plan more clean-ups on a regular basis.

“Since Irma more than 30 clean-ups have been organised on the beaches of the French side, and we have been strongly supported by the local French side newspapers and TV that publicise our events on a regular basis, explained Vice-President Audrey.

“We organise our clean-ups every two weeks, usually on Sunday mornings and we manage to motivate about 30 volunteers each time.”

The association has several projects it wants to develop, in the schools, through partnerships with sports associations, developing more visual awareness through signage, and to work with tourism professionals.

“On September 15, we participated with EPIC on organising a World Clean Up Day in Grand Case which drew more than 150 people,” Audrey adds. “We have also cleaned the entire La Savane Pond on two Sunday mornings with the agreement of Conservatoire du Littoral. In one year, we have cleaned up three ponds and 16 beaches, some of which required returning frequently to make sure the job was well done.”

The association receives help from various businesses and the Collectivité donates trash bins and materials.

This weekend the association will be cleaning up the Mont Vernon end of Orient Beach on Saturday, November 10, from 8:30am to 11:30am. Trash bags and gloves will be provided. Volunteers, especially from the Dutch side are encouraged to join in this weekend, and at any other time.