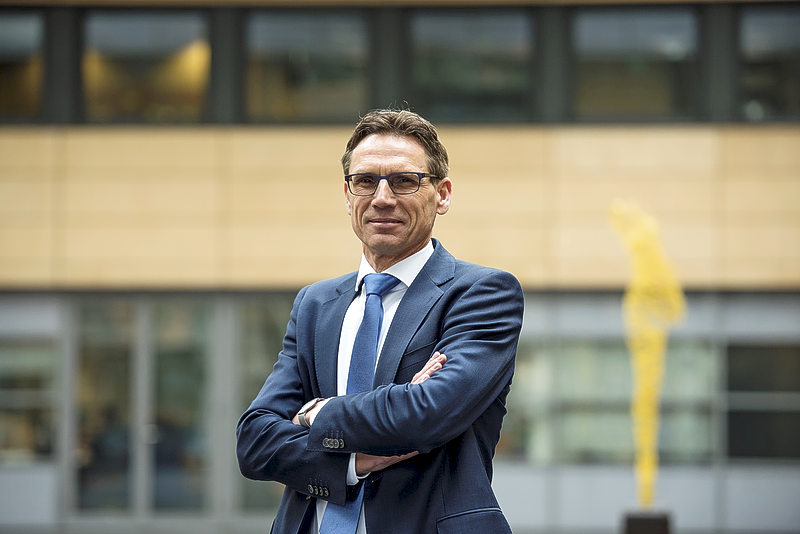 PHILIPSBURG–Attorney General Roger Bos has noticed a trend breach after Hurricane Irma struck St. Maarten. Prior to this devastating category five hurricane the Police obtained little information about crime from the public. This has changed after the massive indignation about the widespread looting that took place.

The Attorney General said, last Friday, during an extraordinary sitting of the Joint Court of Justice in Curaçao during which Judges Gertrude Edelenbos (49), Erik Jan Meijer (49) and Thomas Veling (43) were installed. They are all from the Netherlands.
Attorney General Bos said that the effects of Hurricanes Irma, Jose and Maria are still very much visible. Shortly after Irma’s passing, however, justice started to run its course again following a new approach after a briefing at the Prosecutor’s Office with judges, lawyers and probation officers present.
With the Courthouse severely damaged and printers disabled, legal decisions had to be written out by pen or hammered out on a typewriter, said Bos.
“Where Irma brought out the worst in people where plunder is concerned, own initiative and creativity brought out the best in people who gave justice a face again,” said Bos.
He said that in cooperation, the judicial partners did what society expected them to do: arrest looters, make an end to injustice, and where possible compensate victims and bring suspects before a judge.
“Previously, the Police received little information about criminal cases, but the massive indignation about the Irma looters changed this. Residents of St. Maarten opened a Facebook page against looters and became active in providing, – albeit usually anonymously -, information to the authorities, the Police and the Prosecutor’s Office,” said Bos.
According to the Attorney General, this confirms that “much more information about criminal acts is known among the public at large. After the Police started working based on information about the whereabouts of plundered goods their presence at these locations often led to new reports by other residents.”
When residents see that something is being done with their information this is an “enormous” stimulant to provide more information, said Bos.
“In small communities where many people know each other this is obviously more complicated. We have not yet discovered how to make sure that information arrives at the right place. Anonymity for people who report crimes is a safeguard. Guaranteed anonymity is an absolute condition and people must see that something is being done with their information.”
Bos said that the willingness to share information made it possible that the Police and the Prosecutor’s Office in St. Maarten were able, and are still able, to solve many cases.
Last week Wednesday, the first looting-related cases were presented to a Judge. These cases led to “stiff penalties,” according to Bos.
“Was it that massive indignation that led to a trend breach or was it something else? Fact is that it’s there and that we as partners in security need to make sure that something is being done with it. If we handle this correctly, this will stimulate trust in Government, which in its turn will lead to more reports. In combination with prevention this will be an impulse to create a safe environment,” the Attorney General said.
Bos was not the only one to refer to post-Irma St. Maarten in his speech to the new Judges. Joint Court President Eunice Saleh said that the installation session, which was initially planned for September 8, had to be postponed due to the passing of this devastating hurricane.
She lauded the resilience of St. Maarten’s residents and of her colleagues at the St. Maarten Courthouse. Despite suffering considerable damage, they managed to reopen the damaged Courthouse on October 16. Saleh ended her speech in complimenting them for their perseverance and major involvement.
Dean of Curaçao’s Bar Association Rogier van den Heuvel also referred to the resilience of the judicial partners in bouncing back so quickly after the hurricane. He wished the Windward Islands quick recovery.