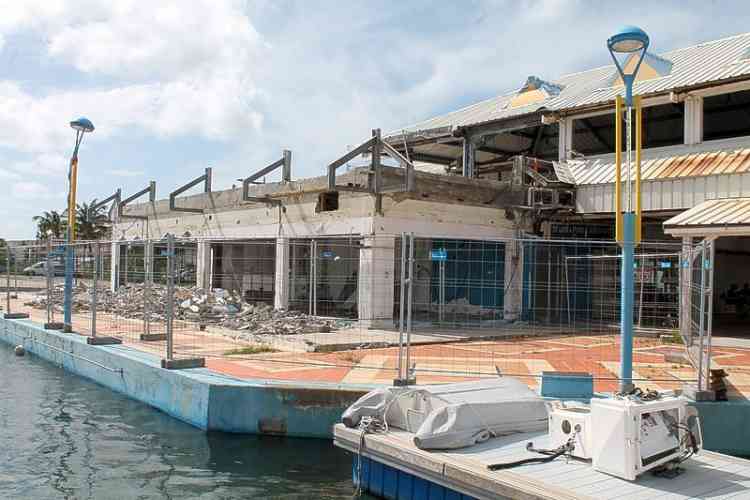 MARIGOT–At least seven businesses in one of two buildings in the Auberge de Mer part of Marina Royale, opposite the cemetery, have been given two months to leave by the Collectivité, according to a notice posted on a shop front describing the building as “in peril.”

The notice has caused an angry backlash from affected businessowners, who say they find it incomprehensible to be ordered out with, to date, no rational explanation, no official report, no dialogue with either the Collectivité or SAMAGEST – the affiliate of SEMSAMAR that manages the marina – and no offers of alternative location or compensation.

The eviction notice comes at the worst possible moment for businesses looking forward to the first chance of a decent season after a year of hardship since Hurricane Irma. At least 30 employees will be out of work if there is at least no extension of the notice.

The building in questions faces demolition, joining the other building at the former Tourism Office car park end where demolition is already in progress.

In this latter building, owners of Maritime School of the West Indies (MSWI) were given only 48 hours’ notice to vacate on July 4. The business was closed for the summer and the owners were in France at the time. They had to urgently call their children to put everything in temporary storage.

“They killed our business in one day,” complained Jan Roosens of MSWI. “We have been looking to rent another place for the school for months but nothing is available, resulting in Maritime School, Yacht Assistance, Caribbean Sail Training Association, etc. to have no more office, classroom, or working space.

“The school has been in existence for more than 15 years, nine years in Marina Royale, and has provided courses and education to local people, mega- and superyacht crew and captains, also safety courses to pilots of Winair and others, courses for TelEm, etc.

“We re-opened only a few weeks after Hurricane Irma and spend quite some money to repair and rebuild. It was not a problem to remain there, in our opinion. We had to pay back all the students that had already enrolled in courses.

“There is no way to find a school location at this moment. We will continue to look and hopefully find something by January or so, but at that moment the season will already be in full swing. The school will still instruct some courses, maybe in a hotel conference room and on yachts, but without a real classroom, storage, etc., it will be difficult.”

Sebastien Brismeur of SXM Marine Diesel Service that distributes MTU engines for mega-yachts said he disagreed that the building was in danger of collapsing.

“They [authorities – Ed.] are using Hurricane Irma as an excuse to say this building is falling apart and must be condemned. It couldn’t be further from the truth. It’s just maintenance that’s needed, but SAMAGEST has done nothing here in 30 years,” insisted Brismeur. “They have plans, yes, but they are not telling us anything. My business already suffered tremendously and we are two months away from the beginning of the season. A lot of yachts are coming back and now we have nowhere to go.”

He said he has hired a lawyer and an expert at his expense to contest the notice. “I’ve got too much to lose not to hire a lawyer. We have to contest what they are claiming. Hopefully that will give us time to get through this season. If they give us a year, that will be something, but to give two months is incompetent and absurd.”

Brismeur said there had been one meeting in June when businesses were told an engineer was coming from Guadeloupe to inspect the buildings and demolition was possible, but no concrete plans were divulged even then.

Jacques, of Antipodes, the longest-established business at the marina for more than 25 years, said he hoped a letter sent to President Daniel Gibbs would lead to a meeting and clarity on the situation.

“It’s a matter of decency and human respect to the businesses to talk to us” he said. “None of us have received any formal letter of notice. Gibbs was the one coming here soliciting votes before he was elected. Now he has to talk to us. It’s illogical what they are doing.”

Added Claude, of the fresh produce store ANAP, “To close down up to 10 businesses when the economy is already suffering makes no sense at all. Do they want to make it more of a ghost town than it already is?”

Jacques also believes the building is structurally sound. As for the contracts with SAMAGEST it was thought these run until 2023. “SAMAGEST changed the commercial leases, which offered compensation if anything happened to our business, to a temporary occupation permit which we were pressured to sign. Now, we realise what a mistake it was for us to sign that,” he lamented.

Over on the water side, the delightful La Petite Auberge des Iles that depends heavily on the yachts also has to move.

“I’ve been building up my business for 10 years and just spent 50,000 euros on a new kitchen,” said owner Frantz Duclenard. “I don’t know where I’m going to go. The stress has been unbelievable.”

Attempts to reach Marina Royale Director Lisa Barrot and SEMSAMAR President Yawo Nyuiadzi for their take on the situation were unsuccessful up to press time.

However, President Daniel Gibbs’ Cabinet Director Hervé Dorvil said he understood SEMSAMAR will be having a meeting with the businesses on Monday.