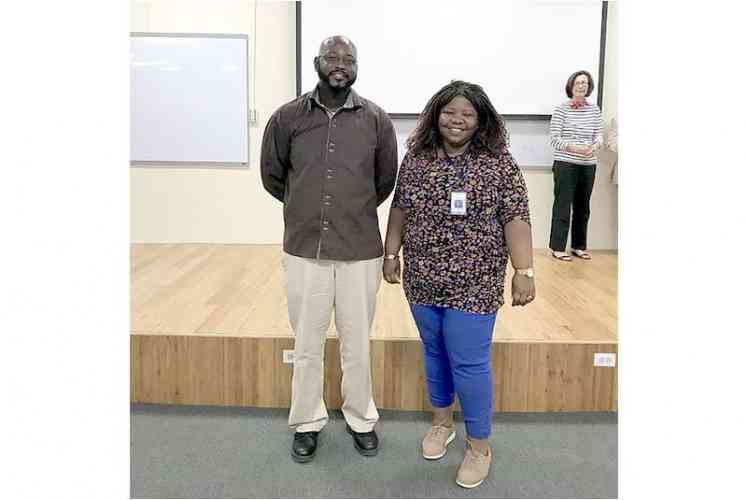 CUPECOY–American University of the Caribbean (AUC) School of Medicine has honoured 54 of its staffers for their work and dedication during the passage of Hurricane Irma in St. Maarten last September.

The workers were surprised with Adtalem Global Education’s Ron Taylor Award, an honour given to employees for in-the-moment contributions that inspire service, build teamwork and go the extra mile. In addition to a certificate, awardees received a monetary reward.

AUC said that when Irma took a direct turn towards St. Maarten, its staffer Melissa Harrison-Grinuva told her husband and mother-in-law to go and shelter at AUC. The AUC Housing Supervisor knew the medical school’s campus would be their safest option in the storm. She also wanted to be available to AUC students who had never experienced or prepared for a hurricane before.

AUC Safety and Security Manager Gerard Lake was also on campus during the hurricane, but his pregnant partner and three-year-old son were at home in Simpson Bay. Leading up to Irma, Lake worked tirelessly to organise hurricane preparedness meetings and to ready the school and his security team for the aftermath. As the storm barrelled through the island, he led efforts on AUC’s campus to keep more than 700 students, colleagues and family members safe.

Immediately following Irma, Emmanuel “Africa” Basil made the difficult journey to AUC to check on everything. He has a particularly strong connection with the campus because he helped build it in the late 1990s. After arriving at the university, he threw himself into action, assessing the water tanks, moving brush and debris out of the way, and helping to make urgent repairs.

AUC said that, like Harrison-Grinuva, Lake and Basil, many of its employees displayed extreme heroism and selflessness during Hurricane Irma. “With their own homes damaged – in some instances destroyed – employees put their own lives on hold to help the university and keep AUC students safe. For some, that meant going a week or more before checking on their homes and extended family,” the university said.

Some of the honourees.

To thank and recognise employees for such dedication, AUC recently held a reception at its campus.

“AUC is extremely appreciative of our St. Maarten colleagues for their help after Hurricane Irma,” said Senior Administrator for Campus Operations Hazarie Ramoutar. “Seeing this community come together to face adversity has been moving. We are honoured to recognise these colleagues for their selfless contributions.”

The Ron Taylor awards are traditionally distributed to a handful of employees for a specific achievement. In light of Hurricane Irma, AUC said it had decided to recognise a larger group of individuals who went beyond to support the school’s immediate recovery, including cleaning out the buildings and dormitories, gathering luggage and helping with water and waste removal.

“It was a special day and I’m just so thankful,” Harrison-Grinuva said. “It’s been a lot of hard work, but we did it together. We are all closer because of that and taking the time to celebrate our accomplishments was a really meaningful experience.”