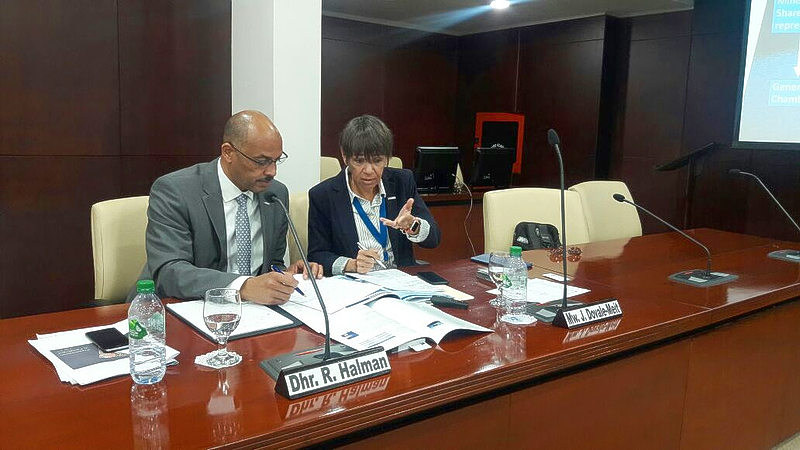 PHILIPSBURG–The General Audit Chamber expects more cooperation from government and its departments following a letter to all secretaries-general from Prime Minister William Marlin. The need for prompt cooperation was highlighted last year when the Chamber was forced to stop its personnel audit at the Ministry of Justice.

The shutdown of this audit was one of the areas raised by the Chamber with Members of Parliament (MPs) in a Central Committee meeting on Wednesday. The session was called to discuss the Chamber’s 2016 Annual Report that was submitted two months ago to the legislature just before the MPs summer recess.

Cooperation of the Ministry’s civil servants has been assured to the Chamber by Justice Minister Rafael “Raffi” Boasman and preparations will soon start to resume the audit. If hampered in any way in resuming the audit, Chamber Chairman Ronald Halman and Secretary-General Joane Dovale-Meit said they will return to Parliament to update on the hurdles.

The halting of this audit also led to the Chamber spending less of its allocated funds in 2016 as did the loss of one auditor. The Chamber is seeking to fill this vacancy.
The Chamber representatives told MPs that the budget cycle also needs to be properly addressed and called on them to address the situation. Of top concern is the review and approval of the 2014 and 2015 annual reports. Without these in place, the true picture of the country’s financial state cannot be properly ascertained by the Chamber.
“The budget cycle is not being maintained,” said Dovale-Meit as she called on legislators to remedy this. The cycle includes the timely presentation and approval of the annual accounts of the country by government and Parliament.

Continued monitoring of the General Pension Fund APS is “a must” for Parliament and government to ensure its viability in the future. Dovale-Meit said the situation of APS and its sustainability “calls for constant vigilance” to protect the pensions of retirees.
MPs pressed the Chamber representatives for opinions on several topics, in particular the functioning and APS investments including in Rainforest Adventures’ Rockland Estate Park. However, the representatives pointed out the Chamber is not mandated to give opinions, rather it deals in reporting on the facts and its findings.

Parliament was urged to use its oversight function to make sure the country’s financial state is in order as this is not only of local concern, but that of international interest considering its Moody’s and other such ratings, said the Chamber representatives.