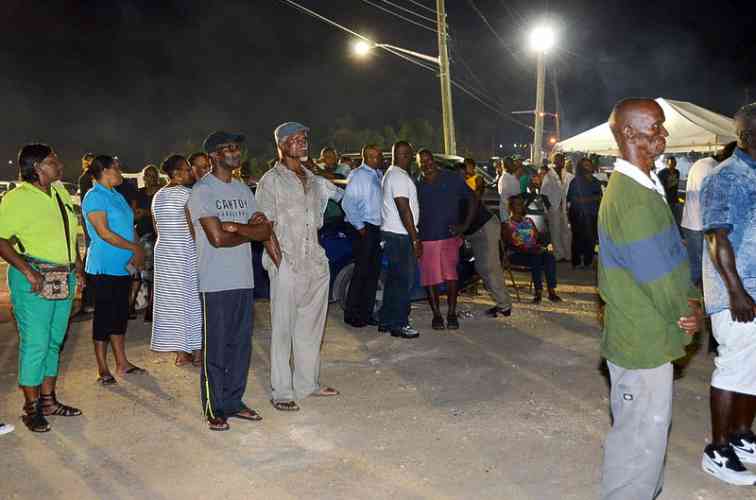 Some of the attendees at the AUM meeting.

ANGUILLA–Anguillians had the opportunity to see and hear the Anguilla United Movement (AUM) 2020 political candidates during their kick-off campaign held at the historic East End school grounds, on Saturday evening, October 20. Under the campaign slogan “Putting Anguilla First,” six AUM candidates took to the stage to introduce themselves to the public and briefly highlight some of the areas that they intend to address more fully during the campaign leading up to the 2020 election.

Moderator Leon Lake, AUM’s public relations officer introduced the candidates from six of the seven districts, namely Haydn Hughes, Kimberly Fleming, Evan Gumbs, Merrick Richardson, Jerome Roberts and AUM team leader Dr. Ellis Lorenzo Webster, who briefly addressed the crowd. They each touched on a variety of areas that they felt the current government was not effectively addressing and offered some insight into their plans to improve those areas and expand focus into other areas. The seventh candidate who will represent district three has not yet been identified.

Chief among the areas identified by the candidates as needing attention were the restoration and continued growth of a vibrant economy, medical and educational reform, improved access to and from the island via both sea and air, a more robust and diverse hospitality/tourism industry, the sale of the Anguilla Electricity company and increased taxes.

All speakers indicated their intention to dialogue with the various private and public sectors of the island throughout the duration of the 2020 campaign in order to better understand the public’s concerns and issues as well as desired outcomes. This approach was summed up by one of the speakers who said, “Our solutions will not come in the form of a 30-page glossy manifesto. We will not make promises that sound great, win votes, but are utterly unrealistic.”

Team leader Webster, last to take to the podium, said, “Ordinary Anguillian citizens such as us can somehow find in their hearts the courage to do extraordinary things. We know what is possible when we come together, united in common effort and by a common purpose. The Anguilla dream is still possible, and we are here tonight as the AUM team to let you know that the Anguilla dream will rise again.”