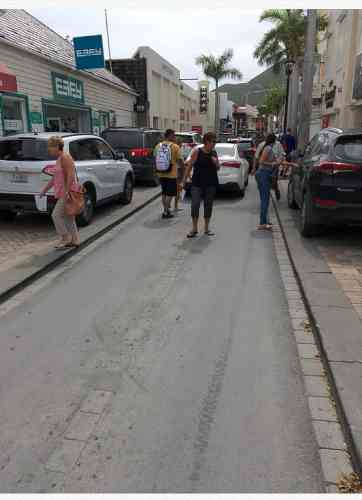 PHILIPSBURG–Persons who park illegally in and around Philipsburg will now risk having their vehicles towed, receiving a fine and facing other charges.

The Police Force in discussion with the Prosecutor in charge of traffic have decided to clamp down on the illegal parking situation in the Philipsburg area, which police spokesperson Chief Inspector Ricardo Henson said has become “quite serious,” particularly on Front Street during the evening hours.

“This traffic offence also occurs during the day and evening hours by persons visiting the casinos and restaurants in Philipsburg,” Henson said in a police press release over the weekend.

Henson said the Police Force and the Prosecutor have received numerous complaints concerning this issue from pedestrians, business owners and residents living on Front Street. He warns drivers to avoid illegal parking in and around the Philipsburg area.
“Drivers will run the risk by having the vehicle towed, receiving a fine for this traffic violation, along with other charges that could be included,” Henson said.

The Police Force and the Prosecutor’s Office “will no longer tolerate this type of behaviour and will definitely take actions against those who do not abide by the rules.”