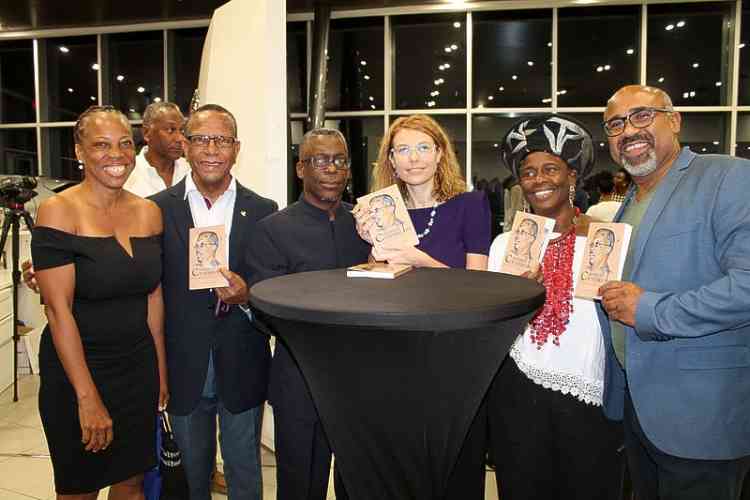 COLE BAY–The history of salt as a physical commodity, described by one author as “a blessing and a curse,” and its powerful influence on literary writing in the Caribbean, were examined by distinguished authors at the seventeenth St. Martin Book Fair closing on Saturday night, particularly in reference to the main book launch of the evening, Caribbean Counterpoint: The Aesthetics of Salt in Lasana Sekou by Sara Florian.

Singapore-based Dr. Florian’s book Caribbean Counterpoint published by House of Nehesi Publishers is her first work on comparative and contemporary Caribbean literature. In it she gave a scholarly examination of the works of St. Maarten’s acclaimed poet Lasana Sekou, while also observing the culture, history and landscapes through literature.

“It began as a chapter I was writing for my PhD thesis and evolved into a critical essay on Lasana Sekou,” she told the audience in host Motorworld’s spacious showroom. “The book gives a bird’s-eye view of Sekou’s 40 years of poetry, engagements on pre- and post-colonial issues, and historical injustices. Years ago, I realised how poignant the symbol of salt is in his poetry. He tackles St. Maarten independence by looking at it through one of St. Maarten’s iconic symbols, the Great Salt Pond.”

She explained one of the reasons for using the word “counterpoint” in the title: “It comes from the musical term invented in the Renaissance and Baroque period. In the context of my book it’s a plethora of different voices from the islands singing together to create a new literary melody.”

Earlier, guest speaker Dr. Kei Miller from Jamaica gave an intriguing analysis of the destructive power of salt, leading into his review of Dr. Florian’s book. He talked of Portland’s Folly, at the time Jamaica’s most extravagant mansion, a Roman-styled villa that was a gift from Alfred Mitchell to his wife Annie Tiffany, heiress to the Tiffany fortune, the walls of which were full of salt, eventually causing the building to collapse.

“Its construction included its destruction,” he observed. “I wonder if at dinner flecks of salt would fall from the ceiling and season their plates. I wonder if their sleep tasted of salt and they dreamt night after night of the sea.”

The story of salt, he added, is pervasive in the Caribbean, repeating itself from island to island, told with different characters and details.

“Salt was not only a preservative but a curse, especially to the slaves who were forced to eat the very thing that ensured the cruelty inflicted on their bodies. The word salt also brings bad luck and is used in many Caribbean expressions about bad luck, but also resilience. Salt preserves, seasons, corrodes, it’s in the air, in the water, it’s a blessing, it’s a curse, and it sprinkles itself on all our stories.”

Cocaine is “technically a salt,” he said, and he wondered if it was no coincidence that reggae artiste Buju Banton’s drug-related convictions in 2011 came about because he was born in “Salt Lane.”

Kei Miller’s latest work “In Nearby Bushes” from his new poetry collection on violence and landscapes is released in August in the United Kingdom.

For the guest recital, Nigerian novelist Chika Unigwe read extracts from two of her books, Black Sister Street, about four Nigerian sex workers in Antwerp, and “Love of a Fat Woman” from her short story collection Better Never than Late, out in September.

Fair coordinator and Conscious Lyrics Foundation President Shujah Reiph in his closing remarks gave the sad news that the Book Fair’s biggest fan, Sheila Marshall, who had come down from the United States for every edition from day one, had passed away.