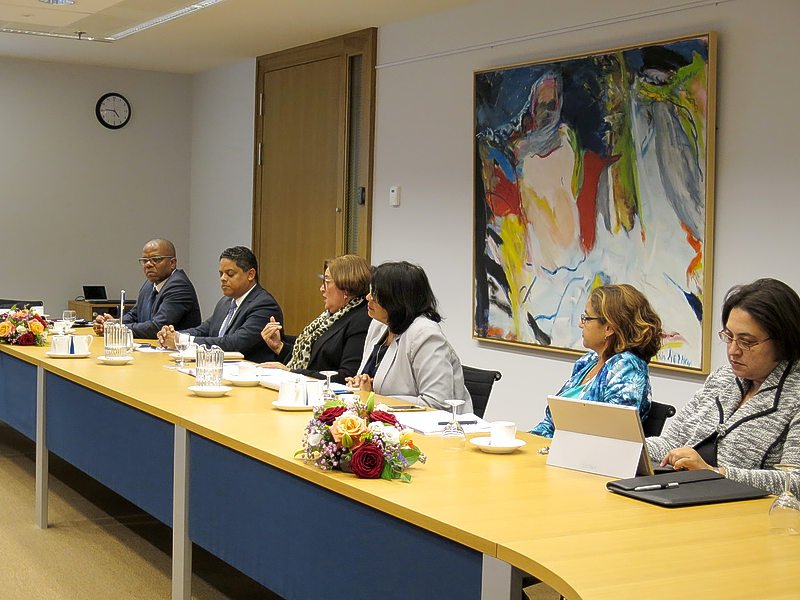 Curaçao Ministers Suzanne Camelia-Römer (Traffic, Transport and Spatial Planning) and Eugene Rhuggenaath (Economic Development) during their meeting in the Netherlands on the Dutch Caribbean aviation crisis.

WILLEMSTAD–According to a press release issued by Curaçao’s Minister of Traffic, Transport and Spatial Planning Suzanne Camelia-Römer certain rumours on social media about the Civil Aviation Authority CBA are untrue.

The now caretaker minister wanted to clarify the situation as soon as possible. The story is that some CBA-inspectors are on InselAir’s payroll and apparently also owners of a company that sells parts to the troubled airline.

In light of these reports Camelia-Römer decided to place the two civil servants in question on mandatory leave for a period of two months. They are not allowed to enter the offices of the CBA during the course of the investigation.

The minister also commissioned Forensic-Caribbean to look into this matter. They will see if these two inspectors have acted against the rules and regulations of good governance.

Their probe will also examine whether there are any relations between the duo and InselAir and is to take about one month. Last week CBA assigned other inspectors to check various aspects of the local airline’s operations.

Meanwhile, the Fokker 50 that had been stuck in Barranquilla, Colombia with technical problems is back in service. Despite still having four MD-80s registered under InselAir Aruba grounded by that country’s Civil Aviation Authority, the carrier is able to execute wet-lease daily flights to St. Maarten with Dominican Wings and Miami with Swift Air, while the Paramaribo (Suriname), Georgetown (Guyana) and Port of Spain (Trinidad) routes are covered by FlyAlways.

Letter to the Editor by Michael Ferrier: Is TO VAXX OR...