Home The Daily Herald Back Street beautification begins next weekend 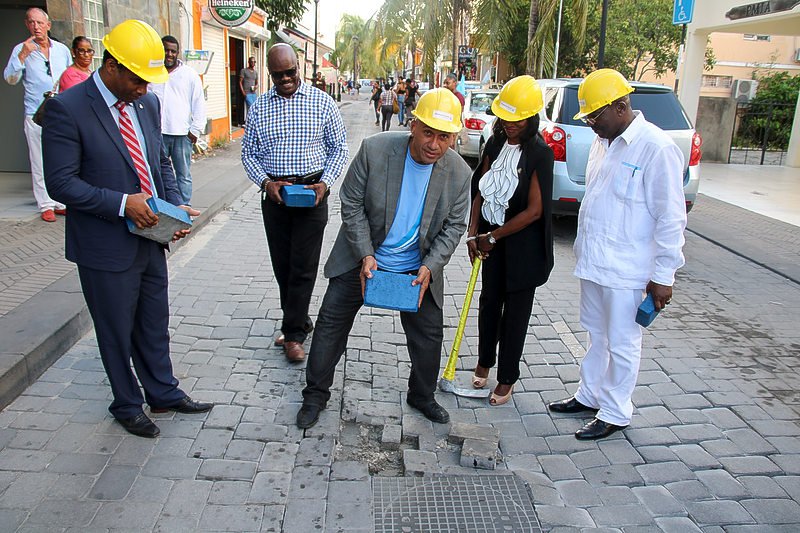 PHILIPSBURG–Road resurfacing and beautification will begin on Back Street next weekend, according to officials who broke ground for the project on Friday afternoon. Bricks that were ordered to initiate the project arrived on the island this week and contractors are eager to begin.

Minister of Tourism and Economic Affairs, Transportation and Telecommunications (Ministry TEATT) Iris Arrindell is heading the project and apologized for the delay, but said the ministry wanted to make sure all is in place to get the project off the ground.

“We will modernize the street, we started with Front Street because of Carnival in April, but now it is Back Street’s turn. The market place will be moved to the Great Bay beach promenade and we will make the area more presentable for our tourists,” stated the minister.

Member of Parliament Silvio Matser was pleased with the project and said a local contractor from the Philipsburg district will be assisting the main contractor. “This project is good for the island, and with this we can enhance our tourist product, because Back Street and Front Street is the first thing our visitors to the island encounter,” said Matser.

The upgrading of Back Street and the further beautification of Philipsburg is being financed by the Ministry of TEATT in its continued efforts to further upgrade our tourism product in Philipsburg.

Prime Minister William Marlin congratulated the ministries involved and said he always used to avoid Back Street when he used to go on Front Street to get an ice cream; now he will be able to cruise on Back Street also.

The upgrading of Back Street will take place within 3 to 4 months, weather permitting. The execution of the project will physically kick off next weekend; government will inform all businesses on the street about the execution plan, which is presently being prepared by the general contractor, Windward Roads.

Earlier this week, St. Maarten United Bus Drivers Association threatened industrial action if Back Street were not completed by the end of September. The association is pleased with the project and hopes that the bus stops are taken into account with this new project.