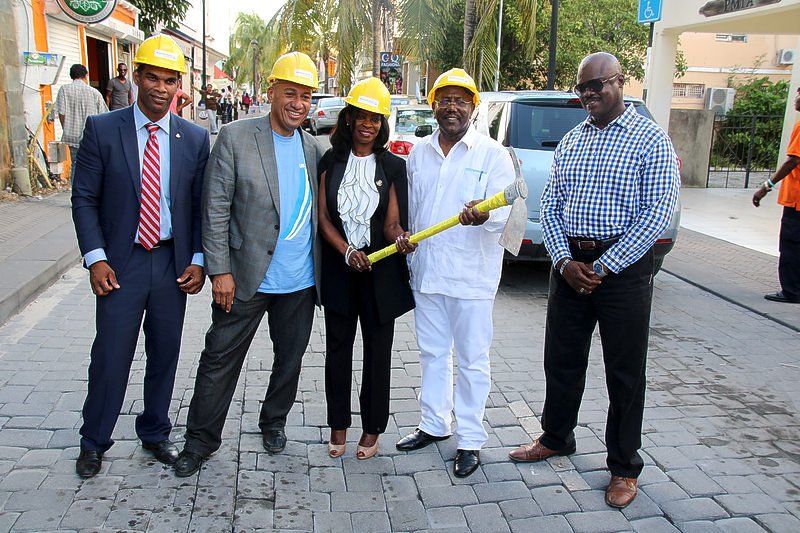 PHILIPSBURG–Prior to the Parliamentary election on Monday, September 26, outgoing Minister of Tourism, Economic Affairs, Transport and Telecommunication (TEATT) Ingrid Arrindell broke ground signalling the start of the beatification and resurfacing of Back Street.

New Works head Kurt Ruan announced during the ceremony that the bricks had arrived on the island and the works would start this past weekend. However, businesses on Back Street contacted The Daily Herald and stated that no works have started yet and they are fearful that the project will begin at the peak of the high season.

Prime Minister William Marlin repeated during the Council of Ministers press briefing on Wednesday the statements made during the ceremony held on Friday, September 23. This newspaper requested a firm date from Marlin during the question and answer session, but he maintained his initial statement that the works would begin soon.

Marlin said on Wednesday that Front Street had been done just prior to Carnival and Government saw fit to start the much-needed road works on Back Street because that street is in bad shape.

He said the road works would include other infrastructural work, including installation of sewage lines and cables. The street also will be wheelchair-accessible.

Minister Arrindell has been contacted by this newspaper repeatedly, but has not returned e-mails or phone calls.

The beatification project was pitched by the TEATT Ministry and funding was approved by the Council of Ministers months ago. The United Bus Association continues to be disappointed in the manner in which the delay of the project is being dealt with.

Meanwhile, the state of Back Street is getting worse, according to one bus driver who uses the street daily.