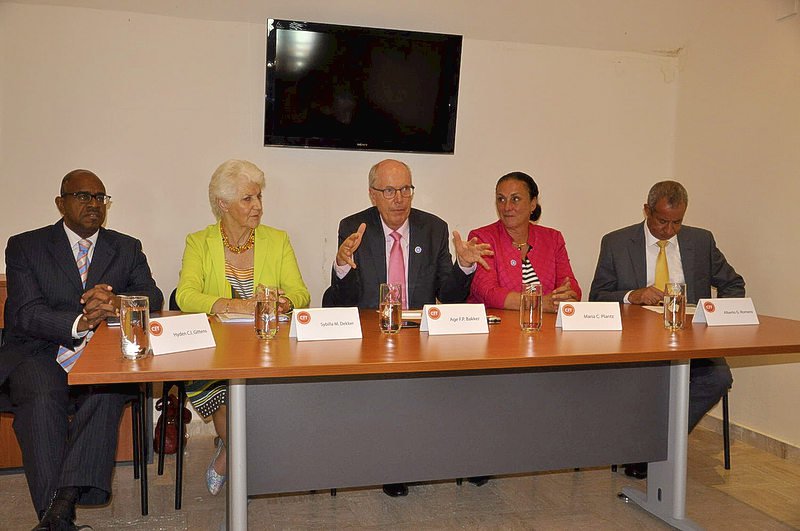 PHILIPSBURG–Realising an approved 2016 budget at the end of this year will require additional effort from the Council of Ministers, Committee for Financial Supervision CFT Chairperson Age Bakker said on Wednesday.

However, he noted that this would not be impossible to accomplish. Bakker was reporting on meetings the CFT board held in St. Maarten on June 28 and 29. The CFT board met with reporters at a press conference on Wednesday and subsequently issued a press release on the issues.

Bakker said priority should also be given to the requirements of the targeted instruction and the improvement of the country’s financial management. The latter also relates to approving the annual statements of 2012 to 2015 and adopting the budget for 2017 in time.

CFT met with Governor Eugene Holiday, the Council of Ministers, Members of Parliament and Social and Health Insurance SZV during its visit.

The CFT board discussed the execution of the 2016 budget with Finance Minister Richard Gibson. During this meeting CFT expressed concerns about the results so far. With a shortfall in expenditures, but an even larger shortfall in income, the results in the first quarter netted NAf. 8.5 million less than budgeted.

“Government revenues picked up somewhat in April and May, but are still running substantially behind projections,” CFT said. It stressed the importance of ensuring additional revenues, including realising projected casino fees due at NAf. 12.3 million and realising dividend payouts by Government-owned entities.

“Even so, Government needs to take structural measures to ensure sufficient income in future years in order to provide basic public services to the population, especially since income through taxes has been deteriorating lately.”

Gibson informed CFT about much-needed plans to reform the tax administration with a view to strengthening the tax base and improving compliance.

Health Minister Emil Lee informed CFT about plans for a new St Maarten Medical Center (SMMC). “It was agreed that establishing a new medical centre needs to go hand-in-hand with reform of the national health care system, since the quality and cost-effectiveness of health care is not only about bricks,” CFT said.

The 2016 budget also foresees compensation of fiscal deficits of previous years and presents a solution for the payment arrears to General Pension Fund Administrator APS and SZV. Both requirements are included in the targeted instruction that was issued by the Kingdom Council of Ministers in September last year.

Bakker emphasised during the meetings that it is necessary that Government takes concerted action to meet the requirements of the targeted instruction. “This will be difficult, but certainly not impossible for St Maarten to accomplish. This also includes the agreed transfer of the Government Building to SZV,” CFT said.

The fourth requirement of the targeted instruction concerns the reform of both the pension scheme and the healthcare system. CFT said it had pointed out during the meeting with the Council of Ministers that initial steps have been taken in reforming the pension scheme, although final reform proposals still need to be agreed on.

CFT also stressed the importance of reforming the healthcare system no later than the end of the year. Such reform should entail the introduction of measures that include a basic health insurance package, the introduction of own risk and substantial savings on medicines by prescribing generic drugs and renegotiating terms for the import of medicines.

“Meeting the requirements is necessary for ensuring the long-term viability of the pension and health care systems while preserving sustainable Government finances in the long term,” CFT said.

CFT said as well that attention should be paid to improving financial management. “Very little progress is being made on that matter. In that respect, CFT advised Parliament to approve the annual financial statements of 2012, 2013 and 2014 as soon as possible,” it said.