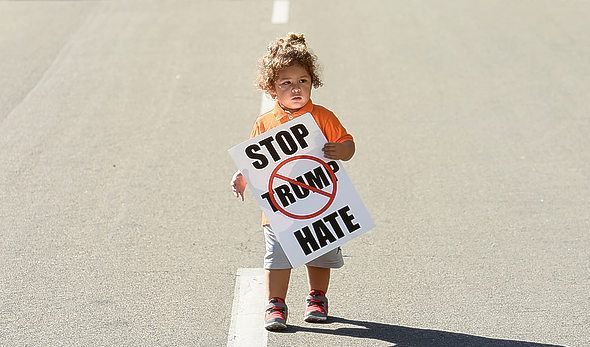 NEW YORK–Latino groups have criticized the Democratic Party for relying too heavily on Republican Donald Trump’s inflammatory comments on illegal immigration to drive Hispanic voters to the polls, calling instead for the party to do more to address Latino concerns, according to meeting notes seen by Reuters.

“(W)e cannot rely on Trump as that will set us up for failure,” according to notes summarizing a meeting on May 2 between Democratic Party officials and representatives of several Hispanic advocacy groups. “Our values need to be uplifted,” they continued.
Hispanics make up around 17 percent of the U.S. population, making them a critical voter group in what is expected to be a tight race between Trump and the Democratic nominee. Democratic operatives have called Trump an ideal spur for getting out the Latino vote because of his hard-line approach to illegal immigration, with some canvassers even using his picture to help encourage Hispanics to register.
The New York billionaire and now presumptive Republican nominee made waves early in his campaign by saying Mexico was sending rapists and drug dealers over the border. He has vowed to make Mexico pay for building a wall to block them and promised to round up and deport the millions of undocumented immigrants now in the United States.
By contrast, Democratic contenders for the White House, front-runner Hillary Clinton and rival U.S. Senator Bernie Sanders of Vermont, have both promised to provide undocumented immigrants a path to legal status. They have also promised to nominate Latinos to key posts in their prospective administrations.
At least two Hispanics are also considered candidates to be the running mate to the eventual Democratic presidential nominee: Labor Secretary Thomas Perez and Housing and Urban Development Secretary Julian Castro.
“While Latinos appear to be a solid part of the Democratic base right now, that can certainly change,” said Brent Wilkes, the treasurer for the National Hispanic Leadership Agenda and the national executive director of the League of United Latin American Citizens, who was present at the meeting.
In the last election in 2012, Latinos constituted 10 percent of the electorate and voted for President Barack Obama over Republican Mitt Romney by 71 percent to 27 percent, according to an analysis of exit polls by the Pew Hispanic Center. Many Latino advocates also stressed to the Democratic Party that, as members of nonpartisan organizations, their concerns are in addressing issues within their communities, such as education and the economy, rather than backing any one party or candidate.
The Democratic delegation at the meeting, which according to the notes included the new Hispanic outreach director, Bridgette Gomez, assured the advocates their Latino outreach strategy was not merely Trump-focused, one participant said. “Donald Trump’s candidacy fits into a much longer term and more thoughtful approach than just one election cycle,” Democratic National Committee spokesman Pablo Manriquez said on Friday. He added that the party is focused on broader issues such as voting rights and the concerns of Latino families for this election and beyond.
Participants at the meeting also told the party they didn’t see enough Latinos in the pipeline for future leadership positions, including elected office around the country, according to the meeting notes. “It’s not just infrastructure for political participation, but how to get people to run for office, how to teach people to run their own campaigns,” said Maria Teresa Kumar, president of Voto Latino, which had a representative at the meeting.