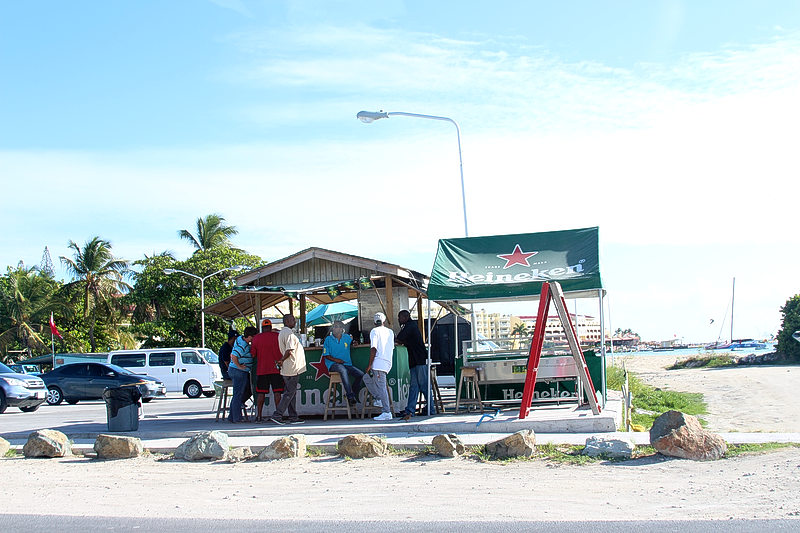 SIMPSON BAY–Captain D’s Hut re-opened on Wednesday after being closed down for nearly two weeks by the Economic Affairs Department for not having the proper permits in place to operate its business on Kim Sha Beach.

The Daily Herald contacted Minister Emmanuel on Thursday for comment, but received no answers from him. This newspaper understands that both Ministers agreed to grant Arundel a temporary vending permit for 21 days, while his brother requests a proper permit from the Economic Affairs Department. The business will eventually be moved near Princess Juliana International Airport SXM, where another vendor is selling fruit juices.

Sources close to the situation indicated that the Department of Civil Aviation had already given a negative advice about the BBQ business being moved so close to the Airport’s runway, but both ministers assured the businessman that he will still be allowed to move his business near the airport.

VROMI plans to construct a parking complex at the parking lot on Kim Sha Beach. Different businesses will be stationed downstairs from the complex and the BBQ Hut has been promised a spot, once the building is completed.

Public Works head Claudius Buncamper has been accused of trying to disrupt the family’s business. In a press release to this newspaper on April 25, the businessman stated, “The Government officials acting on Claudius Buncamper’s behalf are dehumanising and bullying the local business. The representatives have not proposed a meeting to see how they can work with the licence – they are simply ordering him to close.

“Attempting to make the hard-working businessman to appear retrograde, when in fact he has put in for the licence to be in his name from 2013. Rather than give advice and protect the entrepreneurs of this country, the local business-owner is being patronised for his ambition with disdain.”

In an invited comment, Claudius Buncamper said yesterday that the TEATT and VROMI Ministers should be contacted concerning this matter. He does want to stress that he, as a department head, did not close down any business. He was handed a project by the Council of Ministers to complete, which was the parking building, and the Department of Licences served the BBQ Hut notice, not Public Works.

Meanwhile, a court case was initiated by owners of the recently evicted Dive Shop which was situated near the parking lot for several years. The owners are citing that Government is picking and choosing who can stay or move. The court case took place on Friday and there is no word yet on when the judge will render a verdict.