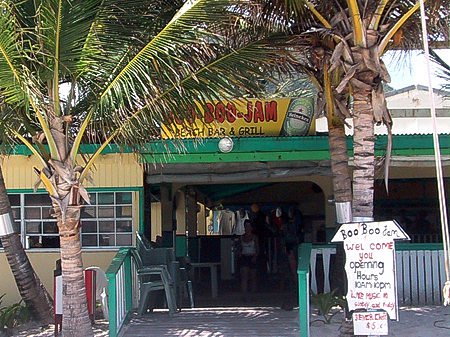 MARIGOT–The Beauperthuy family in St. Martin has learnt that parcel AW59, better known as the piece of land on which Boo Boo Jam is located on Orient Beach, is to be auctioned off with a starting bid at 341,000 euros, despite the fact they are the current heirs.

The family has received notification by a Marshall to evacuate and return the property to its “natural state” within 15 days.

This development has prompted an online petition to be set up by the family’s local branch titled “Our Land Matters – We are St. Martin.” It has gathered 215 signatures so far.

“None of this has been posted in St. Martin, only in French Antilles newspapers in Guadeloupe, so had I not seen the documentation that my brother Rudy showed to me and my brothers and sisters, we would not have known,” said family member Ferdinand “Ferdie” Beauperthuy during an interview Thursday, on SOS Radio with Jacques “Billy D” Hamlet.

“What they did was take 50 per cent off the value that was first done for environmental reasons stating that there are a lot of endangered plants there. We have immediately contacted our lawyer who said we actually have a month to respond, not 15 days. Also the Notary here says the matter is out of his jurisdiction.”

Ferdie indicated the family does have title to the property, but has heard from the French administration that the deed has been annulled.

A company called BCM registered in Lyons, France, with branches in Martinique and Guadeloupe has put the land up for auction.

“Our land matters – We are St. Martin is a movement to safeguard the land rights of the indigenous families of St. Martin/St. Maarten from the unfair practices of the old French colonial justice system,” the petition reads in its opening paragraph.

It continues: “The Beauperthuys of St. Martin/St. Maarten were given notarial deed dating back from the 1930s, and have occupied the property for over 150 years. The French have gathered a group of families unknown to those in St. Martin claiming lineage to an 1861 family member Pierre Daniel Beauperthuy.

“Then in 1973 others living in France, Canada and Guadeloupe started court actions against the St. Martin family. The lawyers and justice system have dragged its feet on these proceedings, in court for over 41 years to the present day.

“The Court appointed three administrators who decided to auction all properties below market value price for special interest groups outside the island of St. Martin and the French Antilles (Guadeloupe).

“The current heirs on St. Martin received from the Marshall notification to evacuate/ return the property to its natural state, having 15 days to respond to the courthouse in Guadeloupe. This property is registered as AW 59 ‘Boo Boo Jam area’ to be auctioned at 341,000 euros.

“The second point is that our uncle Louis Beauperthuy left in his will property for future development of a new Bethany Home for senior citizens, and he is not able to see his wishes benefit the community of St. Martin. The French administration is auctioning off properties without having title and arranging new titles for foreign buyers. Meanwhile, other local families that have built their properties on same Beauperthuy land (Spring) cannot obtain title to date.”