Home Local News ‘Behind the Beyond’ is delightfully entertaining 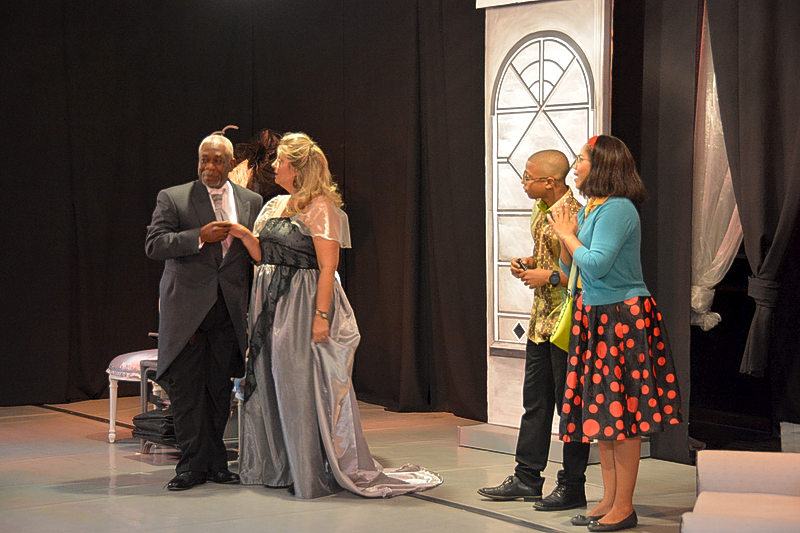 The play, directed by NIA teacher Albina Matuzko, is based on a short story by Stephen Leacock. The Canadian teacher political scientist and writer was the best-known English-speaking humourist in the world between 1915 and 1925.

The comical relational-problem play in three acts is situated in early 20th century Paris and London and presents something completely different for the St. Maarten stage.

For the play, director Matuzko brought together a troupe of players from different walks of life. It is not every day that you see a medical doctor, a civil law notary, a top business woman, a veteran journalist and three students taking a break from their professional lives and studies to take to stage to bring moments of laughter to total strangers.

Add to the mix a fine art teacher, an engineer and a second business executive and one comes to realise how much work has been put in to get this “motley crew” of amateurs in shape for the opening performance on Friday.

All the hard work definitely paid off as all the actors played their roles with much verve and with just the right amount of overacting required to lift a burlesque of this nature off the ground.

The main characters in the play are baronet and parliamentarian Sir John Trevor and his youthful, “starved” spouse Lady Cicely Trevor. Their roles are brought to life by Joe Dominique and Eveline Henriquez-Dijkhoffz, almost literally prompted by the mischievous and lively mimicking narrator girl Meredith Boekhoudt and narrator boy Ray-Angel Simon.

After the show, Henriquez confessed she was “petrified” when she was picked to play the role of super-diva in Behind the Beyond. She was persuaded into attending the auditions by three of her friends. “Just come and look,” they said at the time. “You don’t have to audition, just look.”

Having committed six months of her life to rehearsals, she now thanks “the best husband on earth and my two super-cool boys for letting their mum have some fun playing an English lady from a century ago,” said Henriquez, who in real life manages a wholesale business and sits on several boards.

“Thanks to the hard work, endless guidance and patience of Director Albina, I am here now and ready to play my part with the other members of the Behind the Beyond family of whom I have grown very fond,” she said.

At the age of 58, Dominique is the “old man” of the troupe with only a fleeting role in a Gilbert and Sullivan operetta to count as his only acting citation, but what he lacks in experience he more than makes up for in a bumbling presence. As Sir John Trevor he is happier smoking cigars with the boys at Parliament than dealing with the affairs of home.

“Comedy is hard. Especially if you are a serious and private person by nature,” said Joe. For him, this production has been as much a voyage of discovery of inner self as it is of artistic interpretation. “The director says: ‘Don’t think, just follow your instincts.’ Easier said than done to a born thinker and talker,” said Dominique.

The three students in the cast are St. Dominic High School student Sjoerd Scott (17), Charlotte Brookson Academy of the Performance Arts student Ray-Angel Simon (15) and St. Maarten Academy student Zack Phipps (16). All are talented with a bright future on stage should they wish to pursue that calling.

Of those three, Simon has the most stage performances under his belt. His first love is dance, to which he makes a commitment as a performer with NIA every day of the week, except for Sunday.

Phipps also has quite some experience on stage. He is a last-minute addition to the troupe after at least four other French maids left without notice.

Wherever there are students, there are also teachers around. One can be found in the cast in the tall shape and form of St. Dominic High School and Caribbean International Academy (CIA) Fine Arts teacher Cor Sikkes, who also happens to be the husband of director Matuzko. Besides being a husband, he has the role of set designer, painter, props arranger, repairman, wardrobe technician and “anything else.” He is also one of three stage hands, with additional roles as a valet and a postman.

“I do this because I love the arts and also because my wife deserves to realize her dream to be involved in dramatic arts in a profoundly different way on St. Maarten. If I have to play every role in the production to do that then just sign me up,” said Sikkes.

“While I do not have all the professional backstage, costume, light, sound and prop departments that my colleagues in other countries may have, I do, however, have one of the main things that is constant to all: an amazing cast of people who have dedicated their personal and professional/academic agendas and souls to Behind the Beyond. These are the actors, helpers and technical supporters without whom, none of this would be possible,” Matuzko said.

Behind the Beyond will be playing at John Larmonie Center on Friday, February 24; Saturday, February 25 (sold out); Friday, March 10; and Saturday. March 11. All performances begin at 8:00pm.