Home Local News Belgian girl may have been victim of sexual offence, her mother... 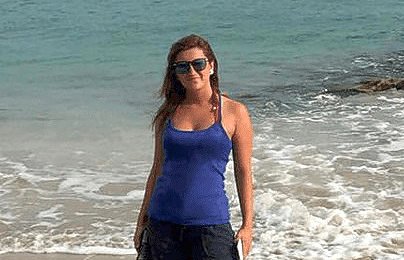 MARIGOT–According to the mother of Belgian tourist Wendy Montulet (21) who went jogging on Saturday and never returned to her hotel, Wendy may have been the victim of a sexual offence.
Wendy’s mother Christine told Dutch newspaper Algemeen Dagblad (AD) by telephone that her daughter had been beaten to death and was partly undressed when her body was found in the bushes in Nettle Bay on Sunday afternoon. “It looks like a lust murder,” the mother was quoted as saying.
The Gendarmerie confirmed the discovery of the girl and stated she had died of multiple puncture and slash wounds, consistent with those inflicted by a knife.
Guadeloupe Prosecutor Samuel Finielz said Monday that there were not “enough elements” at the moment to say whether the victim had been sexually assaulted or raped, nor did he reveal whether the body had been found fully clothed, partially clothed or without clothes.
An autopsy of the body to confirm the cause of death will be carried out in St. Martin on Thursday, the Prosecutor said on Monday.
“See you later, mom. I’m going to jog for a while,” Wendy said on Saturday, never to return. A police dog found her in the bushes on Sunday. “According to the police she was not wearing any clothes anymore. What beast does something like that?” AD quoted her mother as saying.
Wendy had posed happily for some vacation snapshots a couple of days before. She was vacationing in French St. Martin with her parents and her 12-year-old sister. The many pictures Wendy and her mother posted on Facebook were testimony to the good times they were having.
“Wendy on a yacht, Wendy in the ocean, Wendy on the beach; always with a smile from ear to ear. Typically Wendy,” her heavily emotional mother told AD from St. Martin by telephone.
“Wendy was always very positive about life, always smiling, always helping other people. She had just graduated as an educator and had found herself a job. She wanted to help people in difficult situations, and then another human being does something like this. Horrible. I do not understand it,” her mother was quoted as saying.
Wendy went jogging Saturday around 9:30am. “I was not worried at all,” her mother Christine said. “Wendy made her miles here every day without any problems.”
When she did not return by noon her family started to worry. By 2:00pm they called the Gendarmerie. “Wendy would never stay away just like that. She also had nowhere else to go because she had given me her cell phone and purse before she left,” her mother told AD.
Christine said the Gendarmerie had done a tremendous job. Officers searched Wendy’s belongings, watched images of video-surveillance cameras and handed out pictures of her at the island’s airports.
“We also searched for hours at night,” her mother said. Eventually the body was found by a police dog. “In hindsight, it appeared we had passed her body several times. We only could not see her from the street,” said the tearful mother, according to AD.

Source: Daily Herald
Belgian girl may have been victim of sexual offence, her mother says