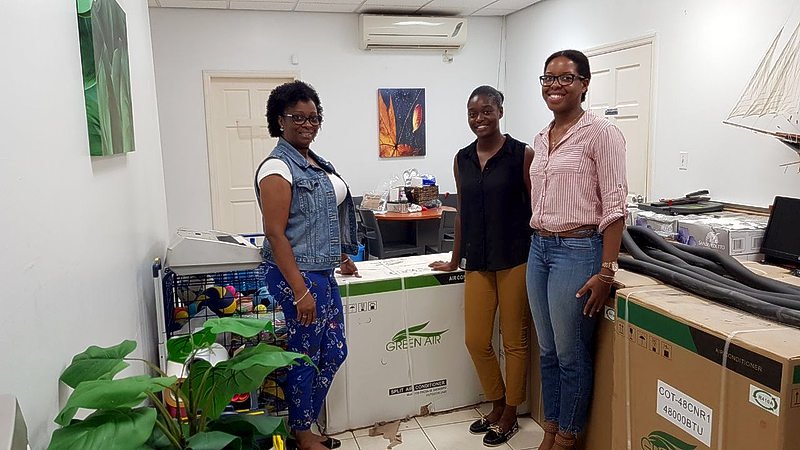 BELVEDERE–Belvedere Community Foundation has received seven new air conditioners from St. Maarten Development Foundation (SMDF) to replace the ones damaged by monster Hurricane Irma. The units will be installed in the multipurpose centre where afterschool activities are held daily.

SMDF has also facilitated the delivery of new commercial kitchen equipment to the centre. Irma destroyed the centre’s kitchen appliances, making it impossible to prepare meals for the children. PDG Supplies installed the kitchen equipment.

The losses sustained by the centre were losses to Belvedere and the surrounding communities, said SMDF Programme and Development Manager Makhicia Brooks. “The new air conditioners and kitchen equipment will go a long way in having the centre be fully operational for the children and community members that make use of the facility,” she said.

The centre functioned as a shelter for Hurricane Maria’s passing. Following the storm, the centre was a safe space for children of the members of the Police Force, Volunteer Corps St. Maarten VKS, Coast Guard and Immigration and Customs Departments. Prior to schools reopening, these service people had few options for childcare.

Describing what had motivated the decision to open the centre for the children even before the reopening of schools, centre Director Jessica Richardson-Lake said, “These men and women have put their lives on the line day after day while still having to worry about their children. If we can at least take away their worries about childcare we will.”

Richardson-Lake oversaw all of the operations. She moved into the centre two days prior to Irma and stayed there in the following weeks to manage its shelter activities, leaving her own damaged home unattended.

Belvedere Community Foundation is one of SMDF’s oldest clients.