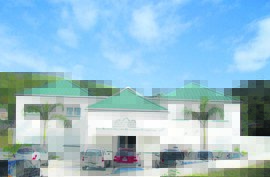 PHILIPSBURG–The dream of homeownership is crumbling, sinking and sagging for a number of homeowners in Belvedere. At least four owners, among them Priscilla Jack-Johnson, want St. Maarten Housing Development Foundation (SMHDF) to remedy what they deem is the result of shoddy construction on the homes they purchased in the past five years.

The Housing Foundation considers the cases as private as they involve a client and has declined to indicate whether or not the homeowners will be assisted with home repairs.

Jack-Johnson told The Daily Herald she bought her home in good faith, relying on the inspection report provided by the Housing Foundation for the home on Golden Grove Road that she purchased in 2013.

“We noticed cracks around the windows before we moved in and so when we moved in, there were repairs going on,” Jack-Johnson said. She moved into the home a year after purchasing it and settled down with her family. However, a crack coming down from one of the rafters appeared in July 2013.

“Initially, we were told our house was the only one with these issues,” the home owner said. This turned out not to be the case and now affected owners, who say they are not getting assistance from the Housing Foundation, have taken their complaints to Public Housing Minister Christophe Emmanuel.

SMHDF has told homeowners there is no money to fix the houses, said Jack-Johnson. This cry often came after she and her family had been told to prepare to temporarily move out for repairs to take place. This, she said, happened to her family several times.

“We are extremely frustrated with this situation. All we want is for the Foundation to do what they have said they were going to do, which is pay for the repairs, put us up while the repairs are being done and the financial compensation as was offered from them in the past,” said Jack-Johnson.

She had also taken her frustration with the situation to the Ombudsman, but was disheartened to learn that the Housing Foundation is not yet one of the government organs under its purview. The Ombudsman had announced earlier this year that it was working on bring such organs under its review.

Emmanuel, speaking in the Council of Ministers Press Briefing this week, pegged the crumbling houses to “bad construction” adding that there is “something fundamentally wrong” in the way the Housing Foundation is managed that has left the homeowners frustrated.

Blame for not addressing the crumbling homes and their laundry list of repairs has been placed on him as minister by the Housing Foundation, when the responsibility to address the situation lies squarely with the Foundation is self, according to him.

“It is a sad situation … the homes are not liveable,” he said, pointing out that he has been told that at least four homes have cracks in the ring beams signalling that something is wrong with the building foundations.

Faced with the plight of these homeowners, Emmanuel has again issued as call to the board of the SMHDF “to resign respectfully” as soon as possible to clear the way for changes at the public housing institution.