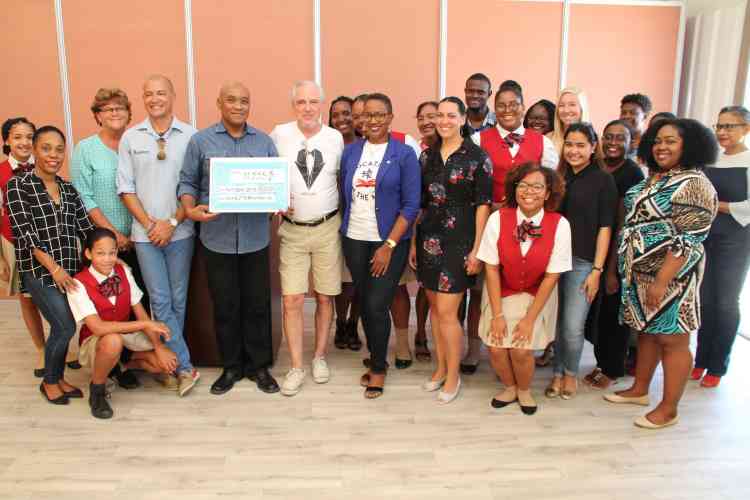 Members of the Bervoets family joined by Education Minister Silveria Jacobs and CBA board, staff and students during the cheque presentation.

PHILIPSBURG–The Bervoets family in St. Maarten and Belgium has donated 10,000 euros to Charlotte Brookson Academy (CBA) for the Performance Arts.

The family had organised a hurricane Irma relief supply drive to raise the funds for the school. Belgian actor Gene Bervoets, who used to reside on the island some years ago and had been a drama teacher, Director of the Cultural Centre and Director of the Council on the Arts and his children Nature Foundation Manager Tadzio Bervoets, and Senior Policy Advisor to the Justice Minister Ayumi Bervoets on Friday presented the donation cheque to CBA.

“St. Maarten is very close to my heart not only because of the fact that I lived here, but also because my kids work and live here,” Gene said. “That is why I was so deeply affected by the effects of hurricanes Irma and Maria on what I consider my home island. When I was following the aftermath of the hurricane from in Belgium, I realised that the island, especially schools, will need all the help we could provide so with Tadzio and Ayumi we decided to assist the Charlotte Brookson Academy with their rebuilding after the hurricane.”

Gene said he used to teach performing arts when he lived in St. Maarten. “I think after a traumatic experience such as a hurricane it is important to provide especially young people with a way to express themselves through art. That is why we thought it so important to support the Charlotte Brookson Academy,” he said.

The performance arts school, which used to be housed in the former Government Administration Building, suffered extensive damage during the two hurricanes, forcing students to relocate to pavilions and in different buildings to continue to receive lessons. The school also lost significant school supplies during the hurricanes.

“With this financial assistance gathered by the community in Belgium mostly organised by my daughter Ayumi and from various people and organisations including from the H. Pius X Institute Secondary School where my son Tadzio attended after hurricane Luis, Het Geluidshuis, Kadonation and Tablefever, we hope that the Academy can get a push in normalising the situation for their students,” Bervoets said.