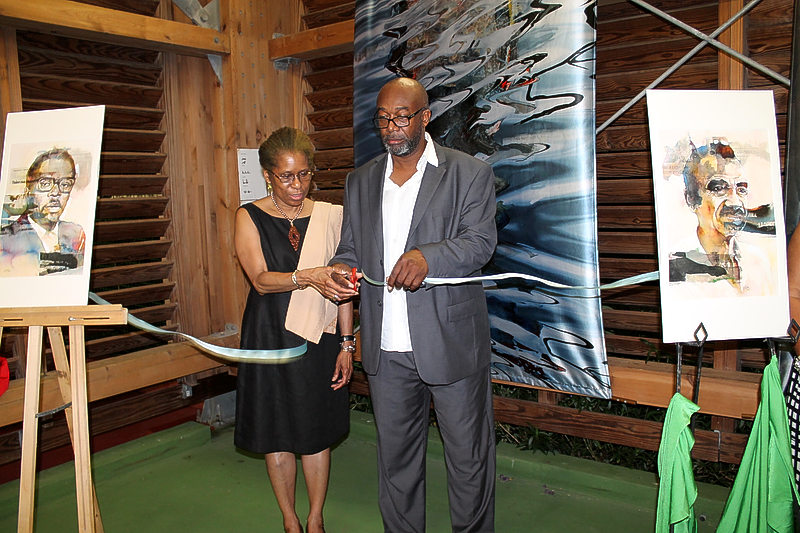 MARIGOT–The fifteenth annual St. Martin Book Fair officially opened at Robert Weinum Cité Scolaire in La Savane last night with close to forty writers from St. Martin and abroad attending; as Mistress of Ceremonies Rhoda Arrindell pointed out, “One for every kilometre of the island.”

The opening ceremony was held in the establishment’s sports complex and, with art being the theme of the event this year, the walls were adorned with the works of keynote speaker and artist Bruce Clarke, Stephanie Thiyani, Ruby Bute and others.

Reiph, who tends to declare every Book Fair the best one so far, said this one really stood out with its variety.

Poet, blogger and teacher Faizah Tabasamu read a poem, accompanied by National Institute of Arts (NIA) dancers Zachel and Naomi under the direction of Clara Reyes.

The keynote address was given by UK-born visual artist and photographer Bruce Clarke, who is based in Paris. He talked at length on his views about apartheid in South Africa, racism and migration. In 2000 he started work on the Rawanda genocide memorial “Garden of Memories.” The ongoing installation has been created with survivors’ families, civil society associations, UNESCO, Rawanda institutions.

He also explained about his mural “Upright Men” for the 20th commemoration of the Rawanda genocide exhibited in Geneva, Lausanne, Brussels, Paris and Monaco.

The walls of the sports complex were adorned with Clarke’s life-size paintings of migrants named Sea Ghosts that were reflected in water, referring to the desperate voyages at sea they make to find a better life. The paintings illustrated his interesting take on migration.

“My idea was to show migrants behind a metaphorical screen of water. Basically they are invisible people, but I wanted to give them back some visibility, and give them strong physical presence.

“Every time we talk about migration it is in statistical forms. How many can we take in, how much space have we got, how much money have we got? We live in rich countries and the only thing we should be talking about is humanity. Anyone who risks so much ought to be let in. Their only crime is to want a better life,” he said.

He said figures coming out about European migration are similar to figures from the slave trade. “The Mediterranean is becoming the same cemetery as the Atlantic did during 400 years of slavery,” he added.

Two paintings were unveiled during the evening, one of Jose Lake Sr., “Father of Journalism” in the Windward Islands, and the other of Felix Choisy, father of Aline Choisy.

Max Choisy was a Deputy Mayor for 18 years, General Councillor and activist. He also started a newspaper in the 1950s and ’60s with Paul Whit from St. James called “L’Esprit de la Jeunesse.”