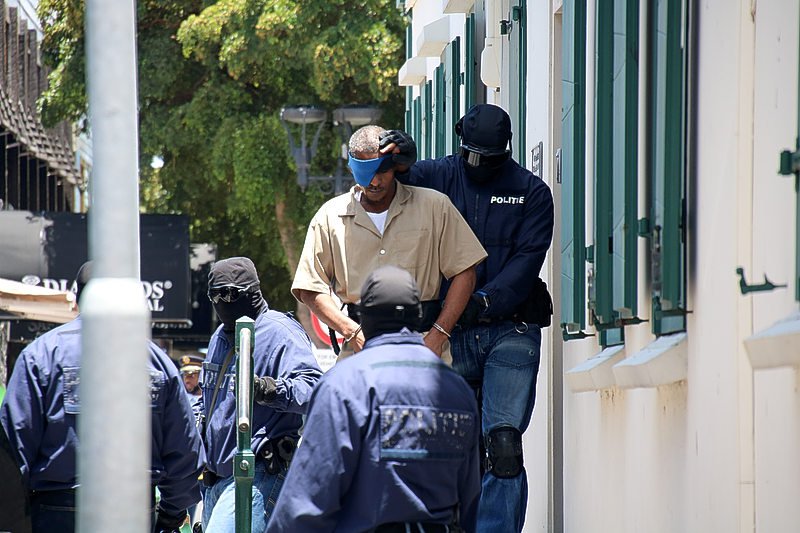 ~ Robbed the home of former Minister of Justice ~

PHILIPSBURG–F.F.C. (38) appeared in front of the Judge in the Court of First Instance on Wednesday morning to answer charges of nine burglaries in St. Maarten committed between December 31, 2010, and October 21, 2015.

The crimes include burglaries at the homes of former Chief of Police Peter de Witte and former Minister of Justice Dennis Richardson. C, is also accused of committing five armed burglaries, attempted manslaughter against a police officer, threatening a 14-year-old boy and possession of an illegal firearm.

Prosecutor Karola van Nie requested 20 years in prison, fully unconditional, for the suspect born in St. Kitts. The suspect also has an outstanding warrant for his arrest in Antigua for a series of dangerous armed robberies. He also has no legal documentation to stay on the island.

In 2015 alone 28 armed burglaries were reported while thus far in 2016 only two. During these burglaries C. used brutal force leaving several victims injured. He mainly stole jewellery, cash, electronics such as mobile phones and expensive perfumes.

On May 19, 2015, C. spotted a target that was the house of then-Minister of Justice Dennis Richardson on Port of Spain Drive. The Minister’s wife was home at the time and spotted C. outside the house. She ran inside, took her three children to the master bedroom and locked the doors. C. forced his way inside the house and ended up at the bedroom where he banged on the door until she opened it.

He was armed with a gun and Mrs. Richardson said she had been scared for her life. She led the man to the safe where he took the jewellery and left the house. According to police reports, this was a very traumatic experience for Mrs. Richardson.

On July 12, 2015, C. made his way into a home on Celsius Drive during the day and noticed that there was a woman at home. Wearing a black ski-mask and black clothing he threatened to shoot the woman with his Glock-45 pistol if she did not hand over all valuables in the home. She cooperated and gave him 450 euros and jewellery. He ordered her to lie flat on the ground and turn around. When she did so, he sprayed pepper spray in her face, took her phone and ran off.

On July 20, 2015 on Calabash Drive, a man was sitting on his porch when C. appeared with his weapon and ordered the man to give him his chain. The man refused and started to wrestle with C. He then managed to throw his gold chain into his swimming pool, making it more difficult for C. to get to it.

Frustrated by this, the suspect hit the man repeatedly on the head until he lost consciousness. By the time he woke up, police had arrived on the scene. The story was corroborated by C.’s children’s mother S. Richardson. She gave a detailed account of the entire incident, giving police no choice but to believe her story that C. was responsible for that robbery.

C. admitted to entering the home of a Voluntary Corps VKS officer on Poinsettia Road in August and burglarising it. Residents heard the noise and called police immediately.

One police officer who was close to the area responded to the emergency call and made his way to the apartment. On arrival, he encountered C. and yelled, “Police! Freeze!”C. did not respond to the command and fired his weapon at the officer. In response to rapid fire, the officer responded by shooting C.

C. was injured, but managed to escape from the scene. Rather than going to the hospital or his house doctor, he went to his children’s mother’s home where he called a Colombian doctor to come and assist with taking out a bullet in his arm. The doctor was successful and was paid US $200 in cash.

November 1, 2015, was a frustrating day for C. when he found out that his nine-year-old son was the victim of a bully’s attack for the third time, according to him. He said he had tracked down the boy’s house and simply wanted to talk to the boy’s parents about the injustice being done to his son.

According to C., the mother became aggressive and he had no choice but to threaten the boy’s family, including the boy. The mother immediately called the police and filed a complaint against C. He admitted to this charge in court on Wednesday, but said he had not threatened them with a gun, he just told them aggressively to watch themselves.

C. admitted to his fascination with guns. He had a gun since 2006 and always committed his crimes with a gun.

The Prosecutor said that C. knew very well how to handle guns.

C. comes from a big family: nine sisters and five brothers. From a young age his mother, a street vendor, used to travel from St. Kitts to Anguilla and St. Maarten and never stayed in one place for too long. This caused him never to learn how to read or write. However, he does know the difference between right and wrong and has street smarts, according to a psychological report.

C. told the Judge on Wednesday that he had done everything for his six children. The robberies were the means for his children to eat. He said he had tried working, but people tend to pay the first month on time and the other months they end up paying very late.

He left the island for Antigua last year and came back months afterward. The Judge was curious to find out how he had managed to leave and come back to St. Maarten without having any legal documents. C. said he had come via boat; he was dropped off on St. Barths, swam 15 miles and ended up on Flat Island. After resting, he swam and arrived on St. Maarten where he took a bus and ended up in Dutch Quarter.

In his final words to the Judge, C. apologised for the people he had hurt. “I am sorry. If I could go back in time and change it, I would. I am sorry,” he said to the Judge.

Sentencing will take place on July 13.

The victims will have the chance to submit claims for damage suffered. The Prosecutor also announced that by then an order to recover proceeds of crime will be submitted. C. sold the stolen goods and received money for them.

“Crime does not pay” the Prosecutor said.