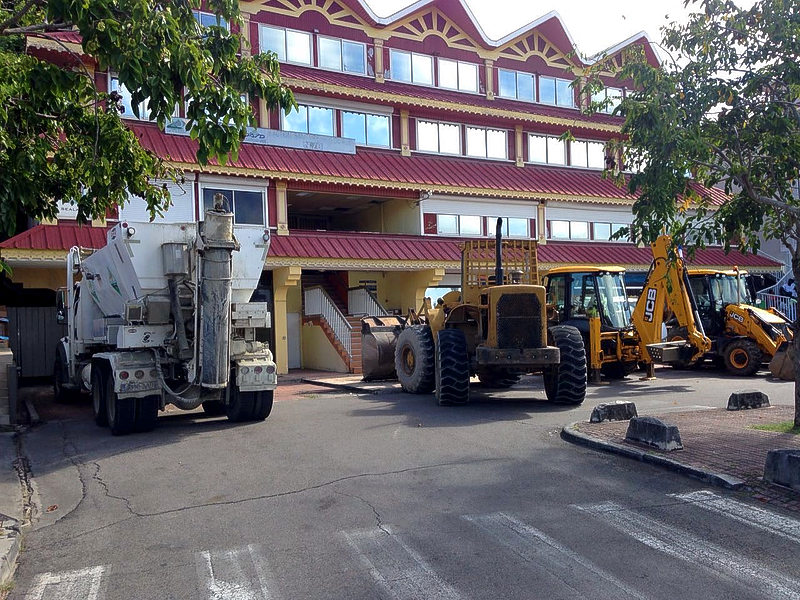 MARIGOT–The mixed capital company SEMSAMAR disclosed late Friday that an early morning blockade of SEMSAMAR offices with heavy equipment was removed after an agreement was reached between the construction company TTGCE and SEMSAMAR.

It was understood a protocol agreement was signed between Managing Director of TTGCE Didier Lake, representatives of SEMSAMAR, and a Labour Inspector.

TTGCE had previously installed a blockade on November 23, 2016, over a dispute with SEMSAMAR over payment of salaries and a protocol at that time was rejected.

According to SEMSAMAR the cause of the dispute is that following operational controls, work done by TTGCE on social housing and roads was deemed to be not up to standard and TTGCE was ordered to repay amounts “unduly paid” back to SEMSAMAR in the amount of 136,820 euros.

The agreement indicates TTGCE no longer has to pay back this amount.

SEMSAMAR in its press release said the agreement takes into account the sustainability of the company TTGCE, the need to preserve the jobs of this company while also respecting the rights of SEMSAMAR.

Back in September 29, 2016, TTGCE complained decisions by SEMSAMAR no longer enabled the company to honour the salaries of its employees. A meeting was organised between SEMSAMAR, TTGCE, Labour Inspector M. Sangua, and a mediator, to resolve the conflict.

SEMSAMAR proposed to TTGCE to make payments of wages with financial provisions to be taken in terms of the timing to pay back unduly collected payments amounting to 136, 820 euros. The SEMSAMAR suggested TTGCE sign a memorandum of understanding (MOU) in this sense but TTGCE took no action on that proposal.

The SEMSAMAR is pleased that the dialogue between all the parties has finally prevailed and helped put an end to the disturbances generated by this conflict, both for employees as to the activities of Marigot.