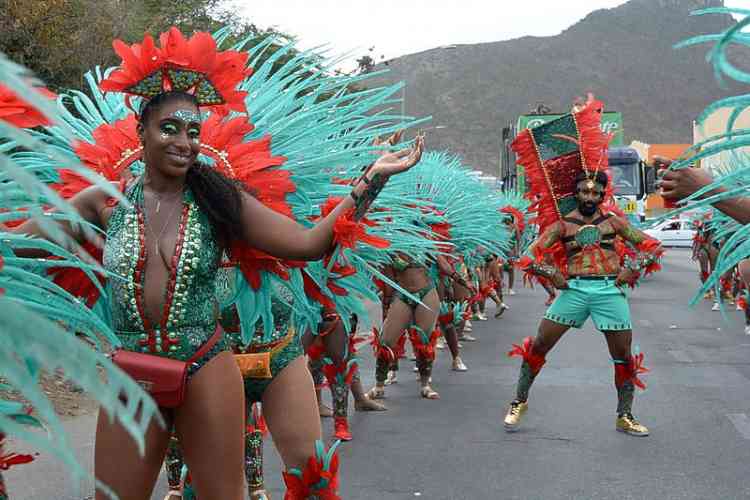 Blue Etoile Productions won the title of Best Parade Troupe for Carnival 50 on Tuesday and Wednesday. The group also won the title last year with their stylish designs.

Key to the win was not just the beauty of the costumes, but the visual impact the troupe had on the road, which included its performances, according to the judges who scored the troupe’s overall performance.

Best Individual Piece was awarded to Rio Productions for its “Crystal Centerpiece for the celebration ball” worn by Member of Parliament Silveria Jacobs, who also won this honour last year.

The Carnival 50 Grand Parade began at the usual starting point at St. John’s Estate and proceeded down L.B. Scott Road, Bush Road, over Prins Bernhard Bridge, Pondfill, turned at what is still called “Old Van Dorp”, up Front Street, Emmaplein, around the Sundial roundabout and ended at Carnival Village.

The Second Day Parade, commonly referred to as the Labour Day Parade, was held on Wednesday despite inclement weather. The children’s troupes joined the adults for a grander parade Wednesday. A record 27 troupes had signed up for the parade, but only 19 troupes were able to participate.

A storm of negative and outraged posts took over social media pages on Monday and Tuesday with concern by troupe participants who did not receive their paid-for costumes as promised by troupe leaders. Delay of material arriving on-island and lack of sponsorship were just some of the excuses given by some troupe leaders who were not able to deliver completed costumes.

Island Revelers and Tropical Carnival were singled out by participants who said lack of communication and empty promises will cause them not to participate in those troupes again.

Island Revelers informed its 120 jumpers that it would not be able to deliver their costumes in time due to delay of several flights carrying the costumes. They were told by group leader Dylan Paul that the costumes would be ready for pick-up at 9:00pm Monday. Revellers tried calling Paul by phone or at the mas camp at 9:00pm, but he could not be found.

Island Revelers members who paid in full for front- or mid-line costumes were frustrated by the lack of communication and hoped for a speedy solution, but Paul was still unreachable by his clients on the day of the Grand Parade, Tuesday.

According to one reveller, a group of the jumpers decided to overnight at the camp and make their own costumes.

“We decided to help as much as we can, because parade is a big deal and we paid our money. There is always a problem with this group. I went over to the camp from 10:00pm and helped out with whatever material we could find until 9:00am on Tuesday. The only problem is that Dylan told us that the rest of our costumes were on a flight coming, but it never arrived,” one reveller told The Daily Herald on Wednesday evening.

A small group of jumpers managed to put their costumes together and take part in the parade, but a large group of participants were not that lucky.

Paul resurfaced on Tuesday afternoon while the parade was on the streets and told participants that most of their costumes would be ready on Wednesday for the Second Day Parade. On Wednesday, a number of Island Revelers decided not to show up and demanded their money back from the troupe.

“We had deadlines to pay our money and we paid it. The day before the parade we started to contact the leader of the troupe, Sade Hodge, and no response. On the day of the parade, she got in a car accident and that was it. We did not hear anything from the team after. Meanwhile, they had other sections that got to go on the road, but what happened to us? We would like our money back as soon as possible,” stated a participant who wished not to be named.

According to Tropical Carnival owner Sade Hodge’s Facebook page, “On behalf of Sade, being up for more than 72 hours can take a toll on you. She felt her eyes closing while going up a hill, then all of a sudden she was going down the hill. She does not understand how this happened with the car holding on to a little tree from plummeting to death.

“She guessed God was telling her that her time is not over as yet and she has much more to do and learn. To the daughter, husband and wife who were present at the accident, I received the text and I would like to thank you for bursting the windows to take her out. In the text you said that she had a special angel with her and I know you three were one of them.

“She cannot remember anything, but I would love to meet you personally to thank you for saving her.

“To her bf, Lario, thank you for answering her call. To Fabiana and the rest of the crew, thank you for pulling though for her on the parade road. Thank you to the police and ambulance team. To her revellers, she sincerely apologises for not coming through to you on time, she is very sad. This experience has taught her a lot and she apologises from the bottom of her heart. Thank you for your kind concern. Love, Sade’s mom.”

St. Maarten Carnival Development Foundation (SCDF) will be discussing these complaints when assessing Carnival 50, and will make a statement at a later date.