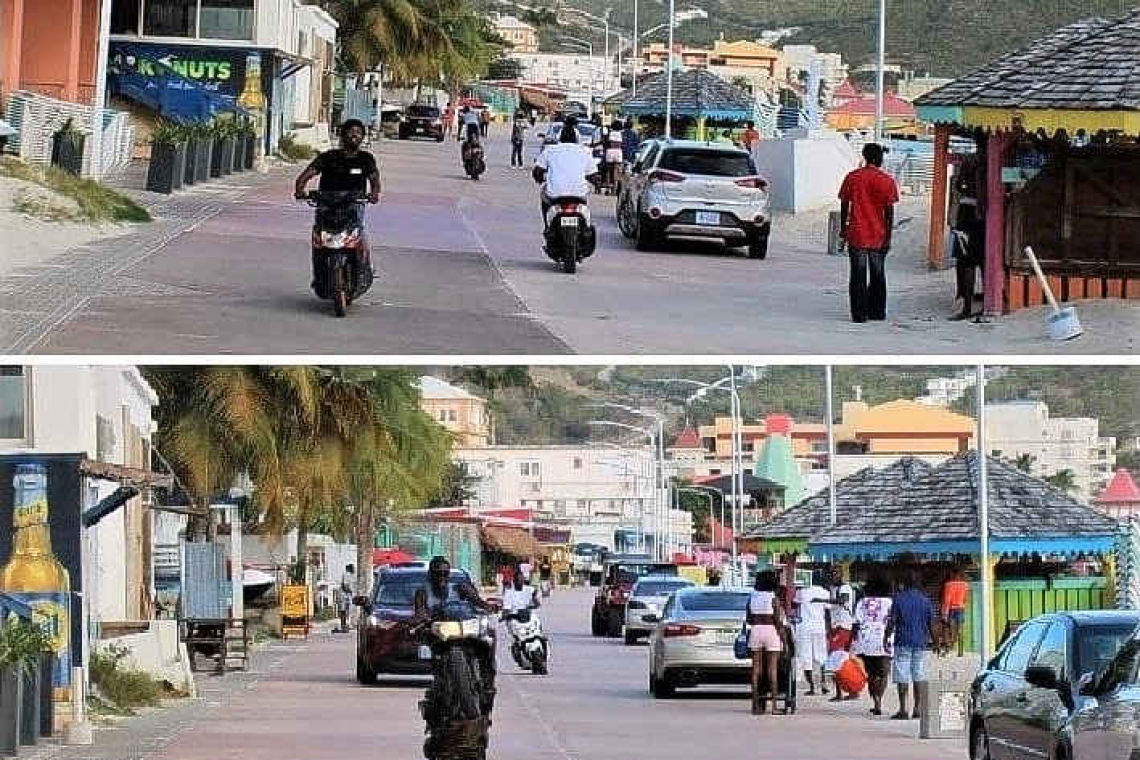 Boardwalk Boulevard is officially off-limits to vehicles and motorbikes.

PHILIPSBURG–Minister of Justice Anna Richardson has granted the request of the St. Maarten Police Force KPSM to be allowed to place 77 new road signs in Philipsburg. As soon as what is and is not allowed is clear to motorists, the police will take enforcement action and issue fines.

By Ministerial Decree of November 17, a total of 29 decisions were taken with regard to Front Street and Boardwalk Boulevard, as well as the alleys in between, to prevent parking nuisance and potentially dangerous and obstructive situations for all participants in traffic.

One of the decisions concerns the placing of signs at the beginning and the end of Boardwalk Boulevard, and at two intermediate locations, indicating that access to the promenade is prohibited for all motorised traffic.

At alleys that provide access to Boardwalk Boulevard there will be signs indicating that it is forbidden to enter with vehicles and bikes. Some dead-end alleys near Walter Plantz Square and uptown at Horizon View Hotel are to be marked by road signs as parking areas.

KPSM submitted a request to the Minister of Justice four months ago to be allowed to place road signs in Philipsburg. The August 11 petition was explained orally by the traffic police on September 23. The minister was given an explanation of the considerable parking nuisance in Philipsburg due to the improper use of pedestrian paths as a parking space. Police also pointed out potentially dangerous situations for local residents, entrepreneurs and tourists.

KPSM said that obstructions and danger could be prevented with the placement of road signs.

“Closing a large number of streets to all vehicles creates a more pleasant and safer environment for pedestrians,” said KPSM, pointing out that the placement of signs increases the possibilities for the police and the Inspectorate of Tourism, Economic Affairs, Transport and Telecommunication (TEATT) to be able to take enforcement action against parking nuisance and unsafe situations in the centre of Philipsburg. A total of 77 road signs will be added in Philipsburg.

Sisalsteeg, across from the cemetery downtown on Front Street, will have a parking sign.

Praktizijnsteeg, opposite, is going to be a one-way street, with drive direction from Front Street to Back Street.

The frequently used Pompsteeg next to Sea Palace Hotel will be closed to all traffic. Signs are to be placed on both sides by order of the police. The same applies to Scheepsbouwsteeg.

Smidsteeg between Front Street and Back Street will get a parking sign. Due to a blockade halfway through, this alley is already used for parking.

Wathey Square is now only accessible to emergency vehicles.

Kerksteeg, Pastoriesteeg and Rinksteeg will be closed to traffic. As there is a private parking place in the middle of Rinksteeg, the first sign is not placed at the Front Street-Rinkstreet junction but halfway, after the parking place entrance.

Four streets without names between Front Street and Boardwalk Boulevard in the area between Rinksteeg and Kanaalsteeg are also closed to traffic.

At the end of Front Street, near Diamond Casino, there will be six signs indicating taxi ranks.

In the area from Stillesteeg/Tamarindesteeg to Schoolsteeg, a total of four traffic signs forbidding parking/waiting will be placed, with underneath a sign “parking only allowed at official parking spaces”. In the area from the Schoolsteeg to Kanaalsteeg in total eight of the same signs will be put on the sidewalks.

Parking violations on Front Street could cost drivers dearly in the next 10 weeks. Until January 31, 2022, Philipsburg, Maho and other “tourism hot spots” are subject to a significantly higher fine for parking violations.

The fine for illegally parked vehicles has increased from NAf. 50 to NAf. 150 (US $83). The increase, announced two days before Thanksgiving, applies during the peak of the high season for Caribbean cruising.