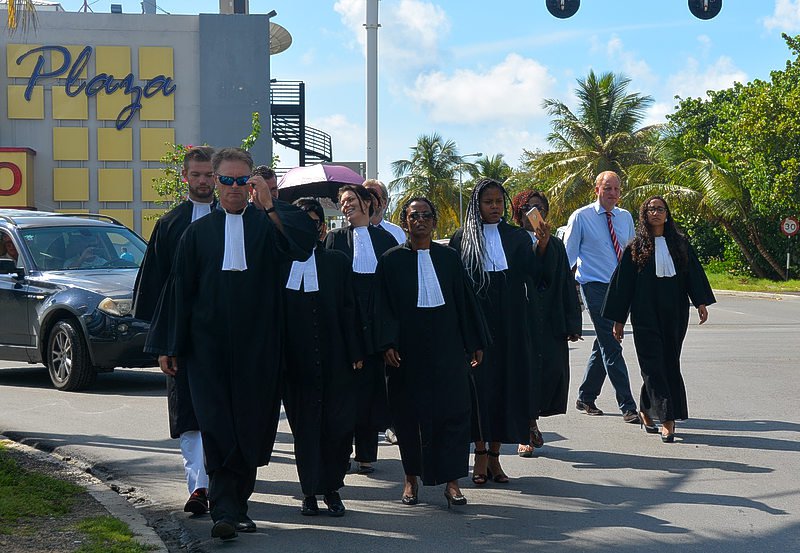 PHILIPSBURG–Pro-bono lawyers have been on strike since Wednesday, April 19, for payment of fees due to them. Their actions are “unfortunate and irresponsible” an angry and emotional Minister of Justice Rafael Boasman said Wednesday, during the Council of Ministers’ press briefing.

Pro-bono lawyers called the strike as Government has failed to honour an ultimatum set by the lawyers for payment of fees due to them.

Pro-bono lawyers assist criminal suspects who cannot afford a lawyer with free-of-charge legal assistance during the handling of their cases. The bill is paid by Government.

The strike has its effect on the handling of criminal cases at the Court of First Instance. At least four cases had to be postponed Wednesday as defendants were left without legal counsel.

At the end of March, pro-bono lawyers called off an ultimatum set for Friday, March 31, and their threats to go on strike, following what they described as “very positive and constructive” talks with Minister Boasman.

During these talks, Boasman had said that he and Minister of Finance Richard Gibson would make sure that all outstanding amounts would be paid within one week or two weeks at the latest.

Nevertheless, the pro-bono lawyers were not paid in full and only received part of their monies due, which left them with no other choice but to call a strike.

The Minister was “not amused” and contacted the lawyers’ spokesperson Geert Hatzmann informing him that everything was paid in full and that it was inappropriate to try and push him up against the wall in creating the image that he did not meet his obligations.

Boasman “underscored” Wednesday that everyone who works needs to be paid for services, and that especially lawyers working at smaller offices cannot afford not to get paid for “one, two or even four months.”

Minister Boasman said he was “disappointed and angry” with the lawyers insisting that until the money is in their accounts they will not render pro-bono services and remain on strike, thus hurting their clients not Government.

“Criminal suspects have the right to a lawyer when they get arrested. These lawyers voluntarily take on pro-bono work. No one is forced to take up an assignment. They voluntarily subscribe to do this work and deliberately refuse to assist in these cases because they did not get paid…You did your work and want your money, but the one who is paying is not the one depending on that service. We are paying them to render a service to someone who cannot pay for themselves to get that service. So they are not hurting me or Government. It is our responsibility, but you are directly hurting the persons who need that service,” Boasman explained.

He said he is “busy” holding meetings with various law offices to ensure that “in future Government is not held hostage by folks who claim that they want the best interests of their clients. We were taken to Court because the rights of inmates were violated, but the same people who took us to Court are now refusing to give service to those same inmates when they need it most.”

Becoming “emotional and moved” Minister Boasman said this was “hypocrisy” because “we cannot at one hand pretend that we are the law protectors of the oppressed, but on the other side if we get five guilders less of our pay then we stop the service to those same oppressed that we say we’re going to serve.”

He called upon the lawyers to take him to Court if they want payment. “Do not hurt vulnerable persons who are dependent on your service.”

Hatzmann said he was “far from happy” with the current situation. He said that while on call he had received several phone calls by the police to consult with clients and to assist them during questioning.

“I was also called by concerned parents who want to know why their child has been arrested and what they are to expect. It hurts me to tell them that I cannot do anything for them. The only thing I can do is to inform them about the procedures during the arrest, detention and procedure before an Investigating Judge,” Hatzmann explained.

To underline the severity of the problem, he said that on-call lawyers are the last resort for the majority of persons who are being arrested. “We are the only ones who can help them while they are in a very vulnerable, not to say, helpless situation. It is, therefore, evident that an on-call lawyers has a very large responsibility, and our Minister knows that very well. In our conversation he pointed out our vast social responsibility and let me know that our action was, therefore, irresponsible,” Hatzmann stated.

According to the lawyer, the Minister should, however, look in the mirror. “As he apparently realises how important the position of an on-call lawyer is he should have monitored the payment of outstanding bills much closer; especially concerning the trailing history of this problem, he was too confident that the matter would be resolved. Criminal law lawyers would speak about ‘conscious debt’ in this regard,” Hatzmann stated.

The strike would go on, “but we are not twisty or spiteful. As soon as the bills are paid we will start with a clean sheet,” he promised last week.

Chairman of the Criminal Law Division of the St. Maarten Bar Association Cor Merx was disgruntled with the Minister’s statements. “He confessed that two months were not paid. If I go by my groceries and pay half can I tell the manager that I paid for all? Just try this with a first-grader and let him wash two cars and pay for one. Tell them with emotion and teary eyes they have been paid,” Merx stated in a comment. Having been an on-call lawyer for 30 years, Merx said he was in full support of his colleagues.

“We are on the barricades. We know what we are talking about. We eat the food from the street…We are one solid block that a Minister cannot split.”

He called his pro-bono colleagues “Les Miserables” under the lawyers. “They have to be there whenever they are called,” including Saturdays and Sundays. They are also the “mops” of the Justice Department, said Merx. “Everyone is paid in time and we have to beg for it?”

He said the striking lawyers may even go as far as calling for Minister Boasman’s resignation.

“If you want action – try me. I can have it at my age, but pay the young generation as you mentioned in your last words,” Merx said in addressing the Minister. The lawyers have planned an emergency meeting for today, Friday.