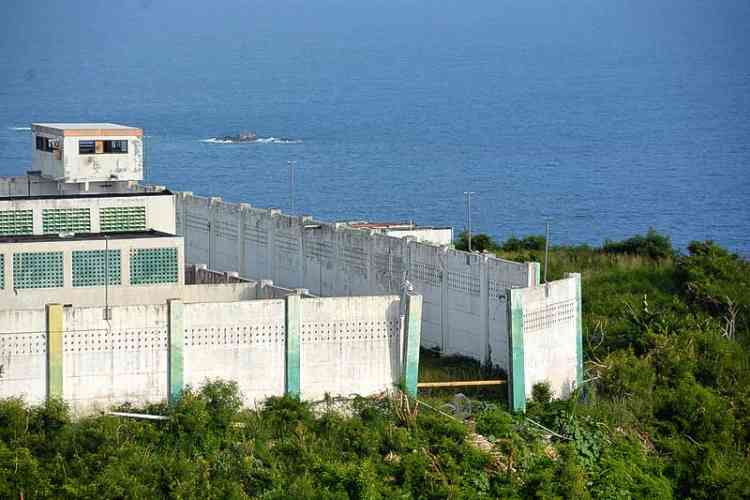 PHILIPSBURG–Based on the major repairs that have to be made at the Pointe Blanche prison, Minister of Justice Rafael Boasman stated on Wednesday that he is considering rebuilding the facility, as a considerable amount of money would be needed to repair the prison.

The prison suffered major damage during the passing of monster Hurricane Irma in September and dangerous criminals were transported to Curaçao and the Netherlands two weeks ago for the time being, to allow repairs to be made at the prison in Pointe Blanche and its substation in Philipsburg.
Some 64 prisoners were transported from the Pointe Blanche prison to Princess Juliana International Airport SXM on November 4 in a joint operation of the Custodial Institutions Agency DJI, police and the Marechaussee (Royal Military Police Kmar).
The inmates were temporarily transferred within the Kingdom of the Netherlands as part of the emergency relief programme and will be off-island for at least six months.
“Judicial experts are presently on island and will assess the damage to our prison. There are a number of possibilities on the table. Repairing the prison to its pre-Irma conditions is one option, but it was not in the best shape before the hurricane swept the island.
“Another option is to patch up and take our time to fix every section, but that would take some years, or we build a new prison that is up to par with international regulations. In the past, international entities indicated that the condition of the prison should be upgraded and since taking office I wanted to fix the issues at the prison,” Boasman said during Wednesday’s Council of Ministers press briefing.
“The judicial experts on the ground have not yet made their take on the state of the prison official, because they are still assessing the damage, but I think they would also opt to rebuild the prison. The rebuilding of the Pointe Blanche prison will take up to two years,” stated Boasman.
The formalisation and decision concerning the option to rebuild or not will be taken next week, he said. The Justice Ministry will also have to come up with a temporary holding facility for prison inmates.