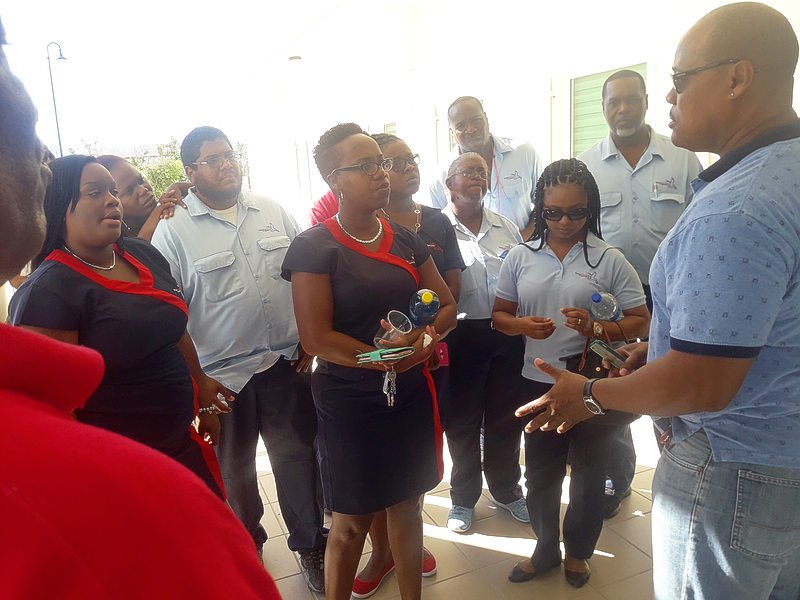 PHILIPSBURG–The National Alliance (NA)-led Government promised Postal Services St. Maarten (PSS) workers on Monday that they will be paid their November salaries and PSS’ overhead expenses will be covered.

Caretaker Prime Minister Rafael Boasman gave this assurance to representatives of St. Maarten Communications Union (SMCU), the PSS Board and management during an emergency meeting on Monday on the crisis situation at PSS.
PSS workers downed tools Monday morning and walked to the Government Administration Building with their union representatives and management to protest the non-payment of their November salaries and to seek Government’s intervention for the payment of their salaries.
The workers’ action resulted in the build-up of a crowd of upset clients outside PSS, who wanted to use the MoneyGram services, but could not. While most of the clients were upset, at least one client said he understood that the workers needed to fight for their rights.
The workers, SMCU, board and management walked to the Government Administration Building, where the union requested an audience with Boasman to determine what Government can do to ensure that the workers get paid.
Boasman was scheduled to have a meeting with a Dutch delegation at that time and arranged to meet with union representatives and PSS management on Monday afternoon. The workers, management and union then left the building and the workers were adamant that they will not resume work until they are paid.
SMCU Secretary Sherman Serastis said following the meeting that the union had “a very fruitful” meeting with Boasman. “He understood our situation and he promised us and guaranteed that the Post Office workers will get paid. Some amount of money will be transferred to PSS’ account. He will go to the Council of Ministers to have a meeting about it, but he promised us that the workers will get paid. He will make sure that they get paid.”
Serastis said Boasman had been very receptive to their concerns and had agreed that it was unfair for persons to work all month and not be paid. He said also that PSS’ plans will be tabled in a meeting of the Council of Ministers to discuss PSS’ future survivability. The union will explain the developments to the workers and will be working to ensure that they are also paid for December.
“It will go good, because the impression that I got from the Prime Minister is that he really wants to solve the problem,” Serastis said.
SMCU President Ludson Evers had told the media earlier in the day that the union had decided to seek an audience with Boasman because the workers needed to be paid. He said authorities were aware of the situation at PSS, as management had sent a letter to former Prime Minister William Marlin requesting a financial injection, but had not received a response.
He said also that Marlin had sought the reinstatement of a fired worker whom the company let go recently. Government, he added, was looking to outsource PSS to the Caribbean Netherlands to manage the postal services, but noted that a financial injection was needed prior to the outsourcing.
Evers said PSS had inherited a company with no finances and stressed that a company with zero finances cannot survive. “The union is here to represent the rights of employee,” Evers said.
PSS has been in a financial crisis for several years that was compounded by the passage of Hurricane Irma which severely damaged its main building, resulting in PSS having to relocate to a temporary location obliquely opposite its damaged building.