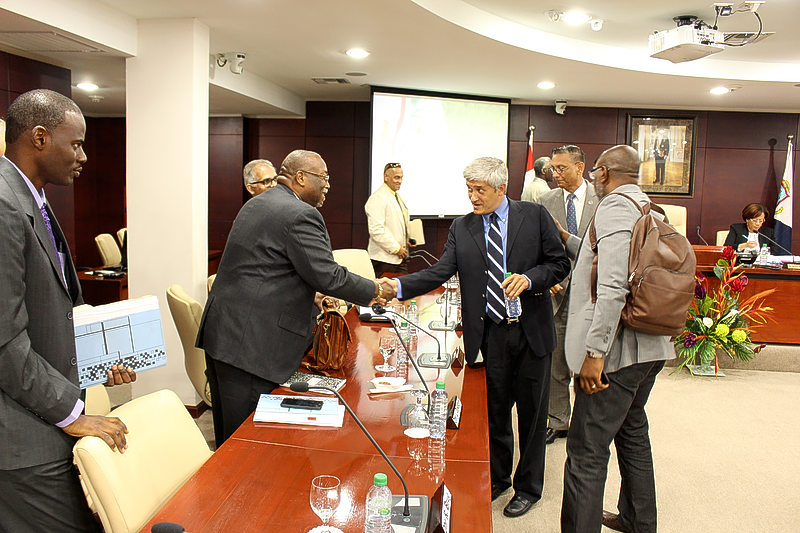 PHILIPSBURG–Minister of Justice Rafael Boasman returned to Parliament on Friday to answer questions posed by several Members of Parliament (MPs) with concerns about the situation at the Pointe Blanche prison. The lack of staff and educational programmes were just some of the issues raised by some MPs.

Boasman maintained his previous statement to Parliament and informed the MPs that most of the information would have to be dealt with behind closed doors as it has to do with the safety and security of the prison.

“The security aspect consists of different factors. Some are material-wise, some are infrastructure, but I cannot go into details of what those are, but we started to deal with some of these issues,” stated Boasman. “The security has been beefed up and every person is searched going in and out of the prison.”

He also addressed a question by MP Tamara Leonard about the frequent fights at the prison.

“I think we need to understand that once a group of people are together in one spot, they must have disagreements from time to time. Especially in a cell, prisoners do have time that they mingle together, but the prison is aware that some do not get along. Fights are sometimes bound to happen. Prison guards who sign up for the job know that it comes with risks,” said Boasman.

Leonard, in the second round of the public meeting of Parliament, was not satisfied with the Minister’s answer, which made it seem that it is normal for fights to take place at a prison. “Prison guards should not have to worry about their life. It is not a normal situation for prison guards to get hurt,” said Leonard.

MP George Pantophlet came to Boasman’s defence and said guards should know that there are risks involved. “A boxer that goes into a ring should not be scared to get hit. Guards should be well aware of the job that they take on,” said Pantophlet.

MP Theodore Heyliger kept on pressing the issue. He said a boxer who fights in a ring cannot be prepared if the person he is fighting has brass knuckles. “We live in a time that the guards go to work and they have to run for cover because the prisoners are the ones with the guns, Minister,” Heyliger said.

Lack of guards continues to be a major issue for the prison, but the management team plans to come up with a strategy to get more staff. One possibility is getting staff from surrounding islands, Boasman said.

He assured Parliament that in three months he could turn the prison around and get things in order. He said that with the new management, he is confident that the situation at the prison will normalise.

The meeting was postponed for two weeks and Boasman informed MPs that he would answer the questions in writing and if more information is needed, he could always return to Parliament.