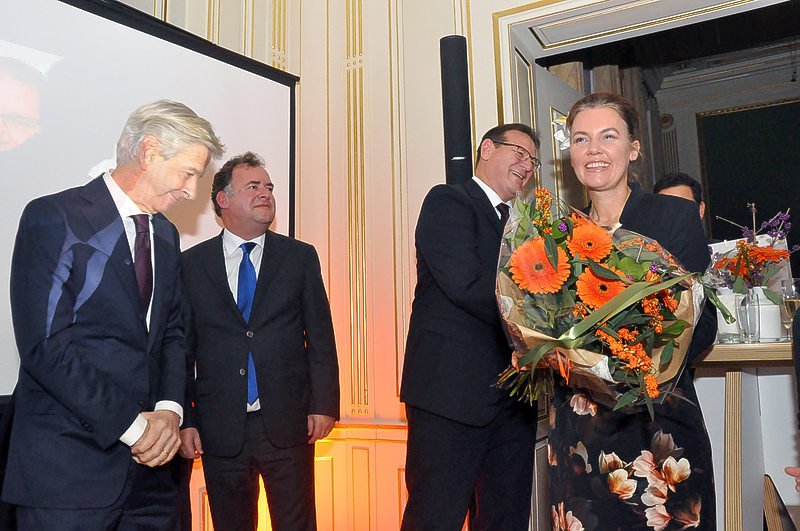 THE HAGUE–Not a farewell, but rather a new beginning. That is how the recently resigned Minister Plenipotentiary of Aruba and new Aruba Governor Alfonso Boekhoudt called his departure from The Hague to take up a new challenge in Oranjestad during his speech at a reception in his honour on Tuesday.

“I am closing this chapter in my career and my life. I had no idea that my three-year adventure would be cut short, nor did I have any notion that this new challenge would cross my path,” said Boekhoudt (51) of his career switch.

His appointment per January 1, 2017, a unilateral decision by the Kingdom Council of Ministers, caused major friction between the Dutch and Aruba Government, because Boekhoudt was not the main candidate proposed by Oranjestad.

The differences were settled in an urgent meeting of Dutch Minister of Home Affairs and Kingdom Relations Ronald Plasterk and Aruba Prime Minister Mike Eman. Boekhoudt had to resign per November 1 after the Aruba Government withdrew its confidence in him. Boekhoudt was succeeded by Juan David Yrausquin last month.

Minister Plasterk referred to the exceptional situation where the Ministry of Home Affairs and Kingdom Relations BZK hosted a farewell reception for a departed Minister Plenipotentiary of another country in the Kingdom. Plasterk acknowledged that it was not customary to organise a reception on such an occasion.

“But not everything is a precedent and sometimes you have to do things differently,” said Plasterk in his address to the large group of invited guests at Escher in the Palace, a museum which in the past has served as the working palace of Princesses and later Queens Wilhelmina, Juliana and Beatrix.

Plasterk said the Minister Plenipotentiary had a complicated position where he had to serve both the interest of his own country as well as that of the Kingdom. “He is a key person in the Kingdom. He ensures that talks proceed.” He predicted that “challenging times with different political movements” were awaiting the Kingdom. In times like these cooperation is a must, he added.

The Minister said that Boekhoudt whom he said has “a big heart for the public cause” would be playing a large and important role as Governor. “It is a special position. Everyone looks at the Governor. He is the one who keeps everything together and acts in the interest of the Kingdom,” he said.

Boekhoudt stated that one of his main reasons for coming to the Netherlands three years ago was his very ill son who required urgent medical treatment. Boekhoudt, who was Director of the Aruba Ports Authority, said he saw an opportunity to do something for his country in the Netherlands. He said that the transition from the harbour company to the political arena in The Hague felt strange in the beginning.

In the almost three years that Boekhoudt was Minister Plenipotentiary, he played a pivotal role in achieving different successes for the Kingdom and for Aruba. He mentioned the several business opportunities that were secured for Aruba through the cooperation with companies such as the Seaway Heavy Lifting, the Lelystad HeliCentre and the Amsterdam Harbour Company.

Boekhoudt did face several challenges during his tenure. He said that especially the start was a bit “rough” with the instruction of the Kingdom Council of Ministers for the Aruba Government to get its finances in order. “The government finances were very much in the picture. It was quite difficult to fullfil my role as Minister Plenipotentiary.”

Another challenge involved the events that surrounded the death of Aruba-born Mitch Henriquez who succumbed at the hands of Dutch police officers when he was arrested at a festival in a park in The Hague in June 2015.

In closing, Boekhoudt said that the reception served as a closure of his period as Minister Plenipotentiary, but that it also felt as a new beginning, as the next Governor of Aruba. “I am very honoured that I am given this opportunity in the interest of Aruba and of the Kingdom.”

Chairman of the Dutch entrepreneurs organisation Ondernemend Nederland ONL Hans Biesheuvel was the first one to address the gathering as, he said, “a friend of Aruba.” He praised the Aruba Government and Boekhoudt for their efforts to achieve more and better economic opportunities within the Kingdom.

Biesheuvel said that Boekhoudt had done “a lot of good things” for Aruba and the Kingdom. “You greatly contributed to building economic opportunities that were not based on emotions, but on possibilities.” Biesheuvel specifically mentioned the agreement that was signed last week with the Dutch micro-financing institution Qredits to open an office in Oranjestad in March 2017. Qredits, which already has opened a successful branch in Bonaire last year, will contribute to the strengthening of Aruba’s entrepreneurs.

Tuesday’s reception was attended by several ambassadors and representatives of the Governments of the Netherlands, Aruba, Curaçao and St. Maarten, including the Ministers Plenipotentiary Yrausquin of Aruba and Marveline Wiels of Curaçao. St. Maarten’s Minister Plenipotentiary Henrietta Doran-York was absent.