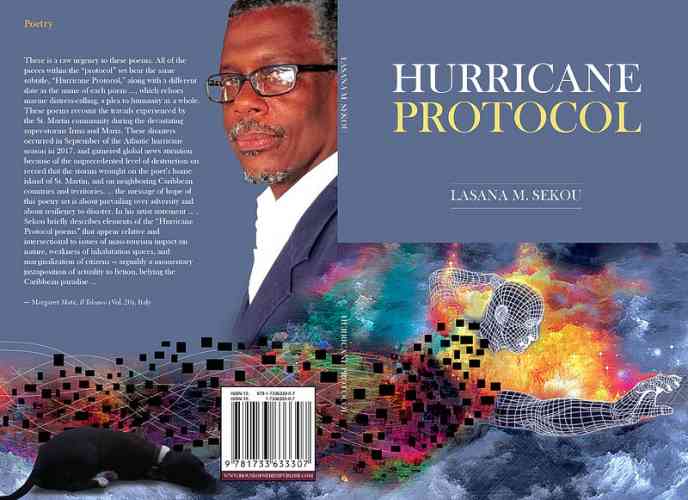 The island’s people will be the first audience to see and hear these poems in one setting at the book party on Thursday, February 28, at 7:30 pm in the Chamber of Commerce Building in Spring, Concordia, Marigot.

Shirley Osborne, Speaker of the Montserrat Legislative Assembly, will deliver the lecture on the “Role of the Arts in Rebuilding After Natural Disasters.” The lecture culminates the month-long celebration of history, organized yearly by Conscious Lyrics Foundation (CLF).

On Sunday, CLF president Shujah Reiph said on the Culture Time radio programme that the lecture/book launch is a “double treat” for 2019. Reiph invited the general public to the cultural affair which is free to one and all.

Hurricane Protocol is itself an interesting treatment of the hurricane in the Caribbean.

“In the California journal Tripwire, which scooped a few of the poems early last year, Lasana expressed a ‘persistent … reluctance’ about the poems,” noted Sample.

“So, at times, readers will have to figure out if he’s talking about experiences in Great Bay or Grand Case, Rambaud or Middle Region. Or whether a poem like ‘11.16.17,’ which gives a glimpse of a real-life mental breakdown during Hurricane Irma, takes place around Simpson Bay Lagoon or the Fish Pond in French Quarter,” Sample explained.

“There is a raw urgency to these poems. All of the pieces within the ‘protocol’ set bear the same subtitle, ‘Hurricane Protocol,’ along with a different date as the name of each poem …, which echoes marine distress-calling, a plea to humanity as a whole,” wrote Margaret Matz in the current edition of Il Tolomeo.

“These poems recount the travails experienced by the St. Martin community during the devastating super-storms Irma and Maria,” added Matz. Il Tolomeo which is a leading European journal of “postcolonial voices.”

Hurricane Protocol by Lasana M. Sekou (HNP, 2019), is available at the book party; at Van Dorp and Arnia’s bookstores; and for international orders at SPDbooks.org.