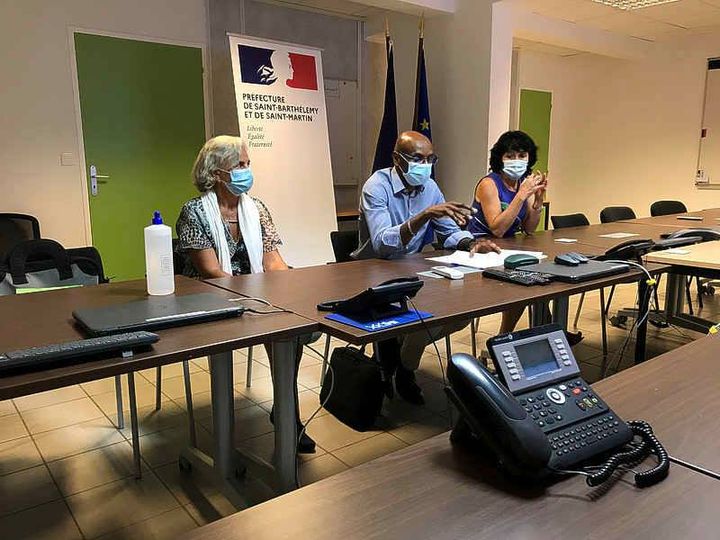 ARS assistant director Jean-Francois Cayet indicated the health situation is still very concerning although there are signs the second wave has hit a peak and the curve is flattening. He said efforts need to be “doubled”.

Currently there are 117 active cases in St. Martin bringing total confirmed cases since the epidemic began to 334. Some 75 new cases have been registered since the last report. In total, 21 persons are hospitalised, including three St. Martiners n the Guadeloupe Hospital.

Cayet said capacity in the Guadeloupe hospital is saturated with all 20 beds in the intensive care unit (ICU) in use. More beds are to be made available. He did not have the current COVID-19 figures for Guadeloupe to hand but there are clusters.

One item of good news coming out of the press conference was that rapid antigen testing has been requested by the ARS for St. Martin as a priority. It is currently being tested in Paris and maybe available in St. Martin in as little as two weeks, Préféte Feucher said.

The whole process from testing to the result takes about 30 minutes. Cayet disclosed another free polymerase chain reaction (PCR) testing campaign will be starting from October 10.

ARS representatives will be meeting with their Dutch side counterparts on Tuesday to discuss joint testing, it was also disclosed.

Feucher said the following two weeks will be focused on continuing to bring the number of cases down. She added requests for “chômage partiel” (part-time working) has also gone down indicating a slight recovery in the economy.

Asked by the Daily Herald if the October 1 date could be extended to October 15 if there is little improvement, she said emphatically “No,” suggesting the next two weeks could be a last concerted push to bring cases down before the tourism season starts.

That is not likely to be any consolation for protest organisers such as Soualiga United which has signalled its intention to react vigorously if the border controls are not lifted today Wednesday.

“To open the border now is to throw away all the good work the health professionals have been doing to slow spread of the virus,” she insisted. “A free circulation will result in more cases and more deaths. And then how will the population react? It’s a very difficult decision to make. Opening the border now also has the risk of the Préfet of Guadeloupe severely restricting travel between the French islands, Paris and St. Martin. That can make the economic situation even worse for St. Martin.”

Asked how prepared she was for trouble based on the decision to extend, she said: “We are prepared. I don’t want to see violence, but we will see. I think it’s a pity if violence is used to solve a health problem.”