Home Local News Boy expelled because of his Rastafari faith 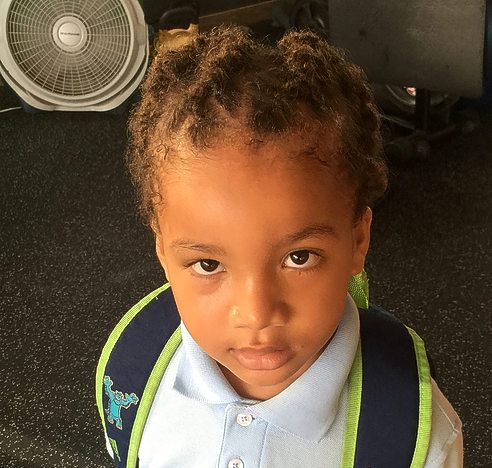 SIMPSON BAY–Immanuel Marica (4) is presently being home-schooled by his parents because Sister Regina Primary School will not allow him to attend that school because of his hair (locks).

The school has a policy that all pupils’ hair should be properly groomed, but there is a catch. The school determines what is “properly groomed.” Immanuel’s parents practice the Rastafari faith and do not believe in cutting their children’s hair because the hair is a symbol of strength.

Immanuel’s father Sergio Marica gave a detailed account of how issues between him, the school and the Catholic school board got out of hand and will result in a future court case.

The family specifically picked the Simpson Bay school because it was the only Dutch-language school in the neighbourhood.

“I’m born and raised Dutch and I believe that my child should learn and read Dutch. We knew that at the school there is a Rastafarian girl pupil with locks in school and for her it is not a problem. I suspect that is because her father is a teacher at the same school,” stated Marica. He said the reason he had chosen the school had to do with not being able to leave Simpson Bay to go in St. Peters traffic early in the morning.

Immanuel started early stimulation at the school in 2014 before his hair grew. The school sent a warning letter to his parents in November 2015 informing them that his hair was getting too long and therefore they should cut it immediately.

Marica reacted with his own letter to the teacher, informing her that they were Rastafarians and would not cut Immanuel’s hair.

The father foresaw that this issue would go far and decided to seek legal counsel from Attorney Jason Rogers, who exchanged several letters between the Catholic school board and his office.

Eventually Sister Regina School accepted Immanuel with locks and his test results were excellent, according to his father. Two months later, the school board reacted to one of Attorney Rogers’ letters, informing him that they maintained that the school has a right to keep pupils out who are not properly groomed.

Teachers told Immanuel’s parents on Monday, August 22, that he would have to come on school property groomed and the parents replied that he was properly groomed.

“On Friday August 26, I received a phone call from the school and they requested if we can come to a meeting at 1:00pm. In the meeting was Marlon Halley, teacher Aventurin, Inspector Mary Gittens and Samantha Beaton, School Principal at Sister Regina.

“In this meeting, we spoke about the problem and I was told that there was no way we could keep the hair of my son. They said by Monday, August 29, it will have to be short cut and groomed. I told them it will be groomed, but not short cut,” said Marica.

“On the Monday, my wife and son went to school groomed, not short cut. The teacher saw them and told my wife that they had to report to the office. In the office were Marlon Halley, Teacher Aventurin and the Principal with an expulsion letter.”

The school board stated in a letter to the parents on August 23, signed by Marlon Halley of the Catholic Education school board, that despite many letters, sent and various meetings held “you again opted to send your child, Immanuel Marica, to our school with not having his hair properly cut and groomed.

“For not adhering to the rules and regulations that were stipulated to you before and during registration, your child is no longer a student at the Sister Regina School as of this date, August 23, 2016. The Inspectorate and the Truancy Office were duly notified of this final decision.”

Immanuel’s parents decided to request permission from the Inspectorate of Education for home schooling for their son and this was granted recently until the school board allows the child to go back to school.

According to the constitution of St. Maarten, article 9.1, everyone is entitled to profess freely his religion or belief, either individually or in community with others, subject to his responsibility under national ordinance.

“I think in this modern time 2016, we can no longer support this type of discriminating rules. Boys have to be like this and girls like that. It is going against my freedom of religion and freedom of thoughts. They say the school is a democratic education, but if a school forces me to cut my son’s hair or else I cannot educate my son, this is more like a dictatorship than democracy,” said Marica.

Immanuel is presently being home-schooled by his parents while they prepare to take the case to court. Sergio intends to take this as far as he can to get justice for his son Immanuel.

The school board was contacted for comment, but questions remained unanswered.

Source: Daily Herald
Boy expelled because of his Rastafari faith