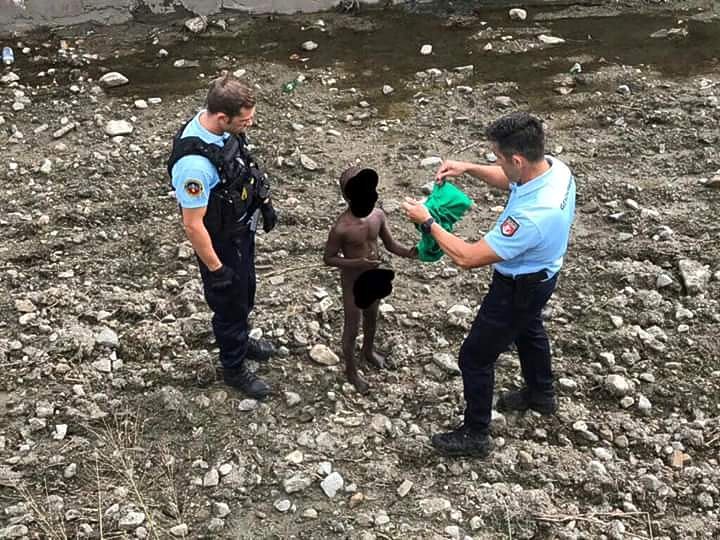 Gendarmes took care of this little boy who was found in a ravine in Cripple Gate on Thursday. It was thought he was returned to his parents.

MARIGOT– Gendarmerie spokesman Capitaine Olivier Norroy said Thursday, he had received no report of a naked boy found in a ravine, indicating the boy was most likely returned safely to his parents.  According to social media reports a little boy of approximately four to seven years old was spotted Thursday in a ravine in Cripple Gate without clothes on by some local people passing by. One of them jumped down and tried to reach the boy, but he ran away and went into a small hole on the side of the ravine. Passing Gendarmes were stopped and they immediately surrounded the boy and got him out. Other people assisted and one man took his T-shirt off to cover the boy.

Elsewhere, two armed robberies were committed in quick succession in French Quarter on Tuesday. The first was at a Chinese supermarket on the Coralita Road at 2:30pm. Two individuals on a scooter and wearing crash helmets stole approximately 300 euros. The same two individuals then proceeded to rob another Chinese supermarket on the RN7 in French Quarter just before the hill leading to Orient Bay; approximately the same amount of money was stolen.