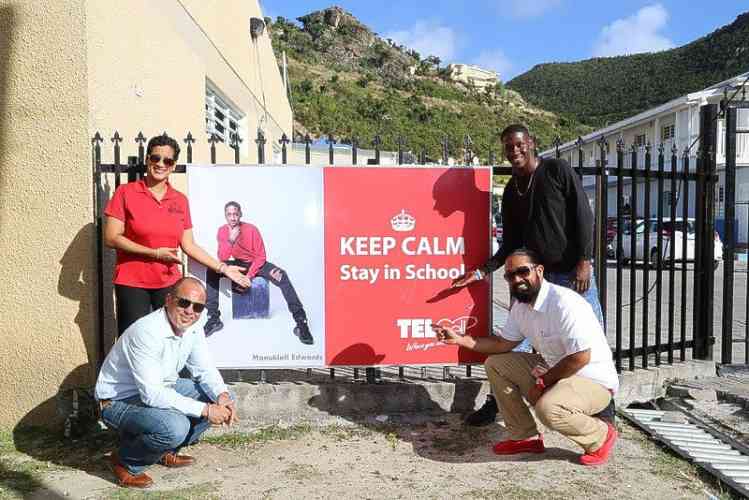 POND ISLAND–Posters of the 2017 TelCell Breakthrough Talent Showdown winners have been erected at different locations around the country where young people congregate, such as at schools and at Philipsburg Jubilee Library.

The Breakthrough team rewards the talent search winners each year with a series of posters featuring winners with positive messages targeting the St. Maarten youth. The posters are put up at various strategic locations where young people congregate.
In the poster placed at Sundial School, which was unveiled on Friday, Breakthrough winner Manukiell Edwards, a Sundial student, advises his classmates to keep calm and remain in school, while at St. Dominic School his message reminds students that a person without an education is like a building without a foundation.
“I have a double responsibility this year because I have also been voted President of the student body at Sundial, so I feel very proud to present these messages to our St. Maarten youth,” Edwards was quoted as saying in a press release issued by TelCell on Tuesday. He looks forward to participating in other activities with the other Breakthrough winners in the future, including work on a music video and studio recording sessions.
Also on Friday, another TelCell Breakthrough 2017 winner, Temaia Dennis, assisted in the unveiling of a new sponsor for the Philipsburg Jubilee Library poster.
“A lot of young people visit the Library every day and I urge them to read the message on [name – Ed.] poster and take inspiration from it,” Dennis said in the release.
TelCell Chief Commercial Officer (CCO) Brian Mingo thanked the youngsters for turning out for Friday’s unveiling and for assisting in TelCell Breakthrough’s mission to bring positive and uplifting messages to St. Maarten youth.
“Young people today face many challenges as they navigate through a very important stage of their lives, making it equally important for them to identify with other young people like them who are doing positive and exciting things that are not only uplifting, but fun too,” Mingo said.
He also thanked the TelCell Breakthrough team who continue to put their efforts into the island’s youth with all they do in organising, staging and promoting the TelCell Breakthrough event each year.