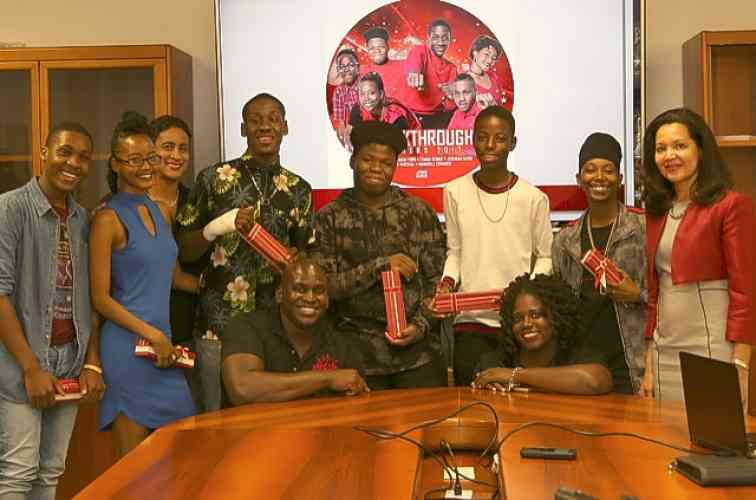 TelCell Breakthrough 2017 winners during the premiere of their music video production “Can’t Bring Me Down,” with event coordinators and TelEm Group CFO Helma Etnel (right).

POND ISLAND–TelCell’s 2017 Breakthough winners launched their very own music video production on Tuesday, in the presence of family, friends, fans and TelEm Group management and staff, in TelEm’s main building on Pond Island.

“Can’t Bring Me Down” is a highly stylised visual offering by producer Joel Ayuk and his video team. It has a look and feel different from past music videos of TelCell Breakthrough groups, but still has the expected high-quality sound and vocal mix of Berteaux “Mr. Rude” Fleming of Xtratight Entertainment.

The TelCell Breakthrough winners were invited to the ceremony, along with their parents and guardians, for the worldwide premiere to show off their many months of work – sometimes against impossible odds, TelEm said in a press release.

Event co-coordinator Angel Richardson said this is certainly one year when she thought the talented group of performers would not realise their dream to end the TelCell Breakthrough year with a music video of their own.

“It’s no secret that this was a very challenging year, coming after Hurricane Irma with all the problems we had finding a venue and finally staging the show,” said Richardson.

She said the TelCell 2017 Breakthrough winners are probably one of the most talented groups that have worked together on their music video projects. Just getting them together to record and do what was necessary took some extraordinary efforts this year and at one stage she even had to pull up the brakes and speak harshly to the youths and their parents.

TelCell Breakthrough co-organiser Cheryl Rismay said the quality of the music video and the end product is proof of what St. Maarten’s young people continue to do with their skill and talents. She urged parents to promise to continue to nurture these talents in their children by showing interest and encouraging them to pursue their dreams.

Richardson thanked Rismay for her hard work during the past year, and the rest of the TelCell Breakthrough Team, who worked many hours behind the scenes to ensure success for the event and for the youth themselves.

“I also want to thank all our sponsors, TelEm management and the members of the public who continue to support our event each year, come rain or shine,” Richardson said. She added that the finished product will now be promoted and will be posted online, on Facebook and as a YouTube video where it will be available potentially to millions of viewers worldwide.

“Many of the past winners have used the music video part of their activities to gain places in dance and music schools and to further their dream to perform to wider audiences,” Richardson noted.

The TelCell Breakthrough winners were congratulated for coming through with their music video launch by Mr. Rude himself, who was off island at the time but took some time out to send a video message urging them to continue to hone their talents. “Shoot for the moon, knowing that if you miss you will still be amongst the stars,” was his motivational message to the youngsters.”

Mingo said the company is always thinking of new ways to reinvent the TelCell Breakthrough talent search, which has already become something of an institution amongst the youth of St. Maarten.

Etnel praised the dedication of the TelEm Group team behind the project over the years, especially last year when the TelCell Breakthrough event turned out to be much more than a show of youth talent, but uplifting performances that made people forget about the misery of Hurricane Irma and “truly lifted all of our spirits with quality that gave me goose bumps,” said Etnel.

Dupersoy, was “very impressed” with the quality of the music video launched Tuesday, noting that on only his second time addressing the TelCell Breakthrough winners since becoming CEO of the company he continues to be amazed at the talent the organisers have been able to dig out of the St. Maarten community.

“If you decide to continue in the field of entertainment, it is clear you have the ability to do so and we at TelEm will continue to support you in any way we can with initiatives such as the Breakthrough Talent Search event,” Dupersoy told the winners.

Presented with an opportunity to say some words after receiving their own personal copies of the music video on a memory stick, the young performers all took it in turn to thank the organisers, producers, and others involved during the past year, for their time and efforts, especially in showing them that success does not come without hard work and commitment – also being on time.

The youngsters said they enjoyed very much learning from each other and being in each other’s company, but most of all creating something of their own in what, for practically all of them, has been a life-changing experience.