Home Local News Brexit may have implications for St. Maarten’s relation with EU 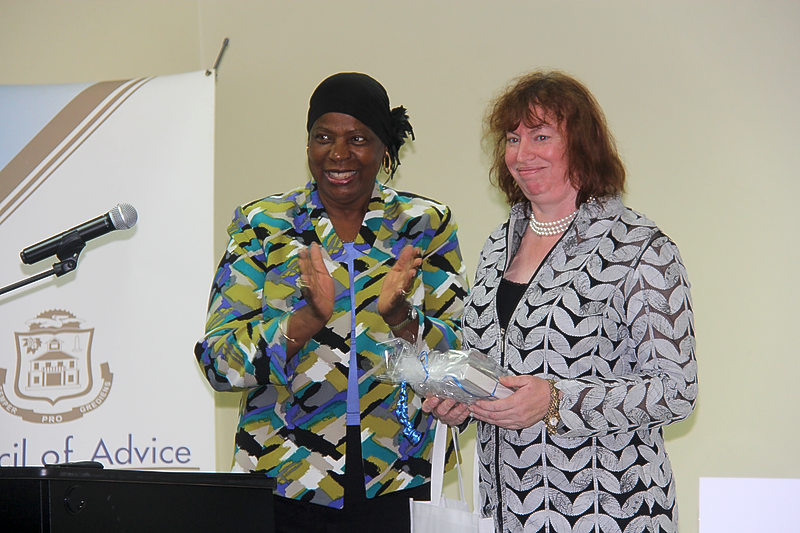 PHILIPSBURG–In 2020 the European Development Fund (EDF) will change drastically and Brexit will undoubtedly also affect the relations between the so-called Overseas Countries and Territories (OCTs) and the European Union (EU).

This was the message disclosed by Professor of European Union (EU) Law at the University of Curaçao Flora Goudappel during a lecture hosted by the Council of Advice at University of St. Martin (USM) on Thursday evening.

Before an audience including Chairwoman of Parliament Sarah Wescot-Williams, Members of Parliament (MPs) Claret Connor and George Pantophlet, Ombudsman Nilda Arduin, Vice-Chair of the Council of Advice Mavis Brooks-Salmon, leader of St. Maarten Christian Party Wycliffe Smith and many civil servants of various Government Departments, Goudappel explained that St. Maarten and the five other islands in the Dutch Caribbean are six of the so-called OCTs of the European Union.

The islands in the British Commonwealth, the French islands and Greenland as a territory of Denmark, are also all linked to the EU as remnants of former empires.

These not only include the Caribbean islands and those in the Pacific, but, for instance, also the Canary Islands and the Spanish enclaves Ceuta and Melilla in North-Africa, as well as the French islands of St. Pierre and Miquelon off the coast of Newfoundland, Canada, to mention only a few.

Being a part of the Dutch Kingdom, a limited segment of European law is also valid in St. Maarten, while there is access to subsidies like the European Development Fund (EDF). Funds are made available by EU member states, but the Fund is not part of the EU budget, Goudappel explained. Sustainability and social projects are the main focus of the Fund.

However, the financial basis will disappear or at least change drastically in 2020 with the end of the present EDF. Any new EU funds or a new system of funding will have to be renegotiated with the EU, said Goudappel.

Moreover, Brexit will mean that not only all British OCTs will leave the system, but that the Caribbean Community CARICOM will also have to redefine its (economic) relation with the EU.

Brexit will also have great consequences for the Overseas Countries and Territories Association (OCTA), as it would lose all British islands from its membership. As Prime Minister, Wescot was OCTA’s regional representative for several funding programmes from 2010 until 2014.

With Brexit the United Kingdom (UK) will no longer be contributing to the EDF. At present the UK provides 15 per cent of EDF’s finances, Goudappel explained. It remains to be seen whether the remaining EU member states would be willing to provide funding for the OCTs. After Brexit, only France will remain as a large contributing member state. It remains to be seen whether net-receivers in the EU, such as Romania or Bulgaria, would be sympathetic to funding projects on faraway islands, such as St. Maarten.

Goudappel holds the Jean Monnet Chair EU Trade Law in the Overseas Territories at Erasmus School of Law in Rotterdam, the Netherlands. She is also a part-time judge at the District Court of Rotterdam and a member of the Examination Board for the Training of Lawyers in the Netherlands. She acts as a consultant and her specialities in research are EU Overseas Territories Law and Justice and Home Affairs in the EU.

During her lecture, Goudappel further focussed on the different options for both the place in the European system and the contents of the relationship with the EU. Special attention was paid to the fact that French St. Martin is a member of a different group of overseas territories for the EU: the Outermost Regions, in which all European law is valid. By contrast, St. Barths made the switch from an Outermost Region to the status of an OCT, Goudappel said.

In explaining the differences between the status of an Outermost Region with that of an OCT, Goudappel said that in her eyes it would be logical if the public entities of Bonaire, St. Eustatius and Saba would make the switch from their current status as OCT to that of an Outermost Region, because with their status as public entities of the Netherlands a lot of European law is already applicable on these islands.

No matter which relations the islands would seek with the EU, “the EU funding dossier remains important for St. Maarten, and developments in Europe must be carefully followed,” Goudappel stated. As one of the attendees cautioned during the question-and-answer session which followed the lecture, “2020 is only three years away.”