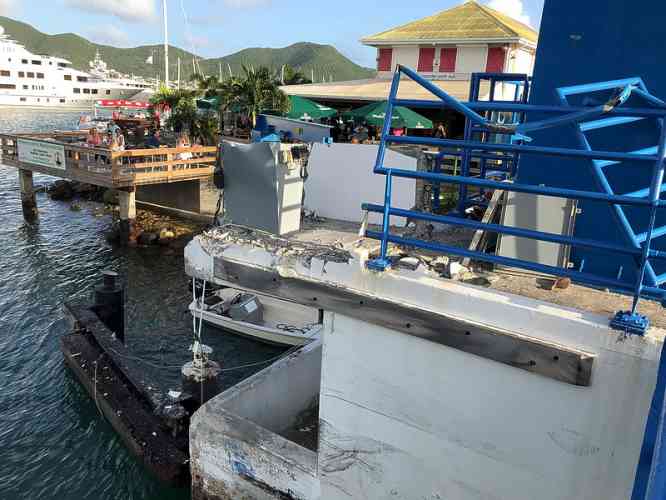 SIMPSON BAY–The Simpson Bay Bridge control booth was destroyed by a large mega yacht entering the Lagoon on Sunday after an open observation platform high up on the vessel’s bow collided with the booth during the 3:00pm bridge opening.

The bridge operator was able to jump out of the booth just in time and was unharmed. The mega yacht Ecstasea also took out blue guard railings as it began to enter. Fears that the bridge would be unable to close were unfounded as the controls were undamaged, only the structure was destroyed, which tumbled into the water below.

Simpson Bay Lagoon Corporation (SLAC) Project Manager Bertrand Peters told The Daily Herald a combination of adverse current and wind conditions, such as on Sunday, often make entry to the Lagoon challenging for captains, but accidents are rare. The booth has been damaged before during an entry, years ago.

“It was tricky – the vessel had some difficulties. The impact took out the booth but the controls and gear were all intact so the bridge remains fully operational and opening times will not be affected,” he confirmed. “We have taken the necessary measures to protect the equipment from rain. SLAC has not had contact with the mega yacht concerned, but government, police, Coast Guard and Shipping Inspectorate have been in touch and they are putting a report together which they will share with us to combine with our report.”

Minister of Tourism, Economic Affairs, Transport and Telecommunication (TEATT), Melissa Arrindell-Doncher said: “I would like to commend Port St. Maarten and the Simpson Bay Lagoon Authority (SLAC) for their professional actions on Sunday with respect to the incident involving a mega yacht. I am glad that there were no casualties and/or injuries as a result of this accident.

“The extent of the structural damage to the bridge control booth is still being assessed, however, we are pleased to report that the bridge itself has sustained limited damage and is fully functional. The bridge operations will continue as normal for the high tourist season as we welcome our tourists and maritime community to our shores.

“Port St. Maarten personnel carried out a preliminary assessment at the Bridge Attendant Booth location, and steps are being taken to repair the booth. Stakeholders will be kept informed and up to date with respect to the rebuilding work that will take place. The aforementioned should not influence bridge opening times.”

No further information could be obtained from Isle de Sol Marina Director Brian Deher or from the vessel’s captain by press time.