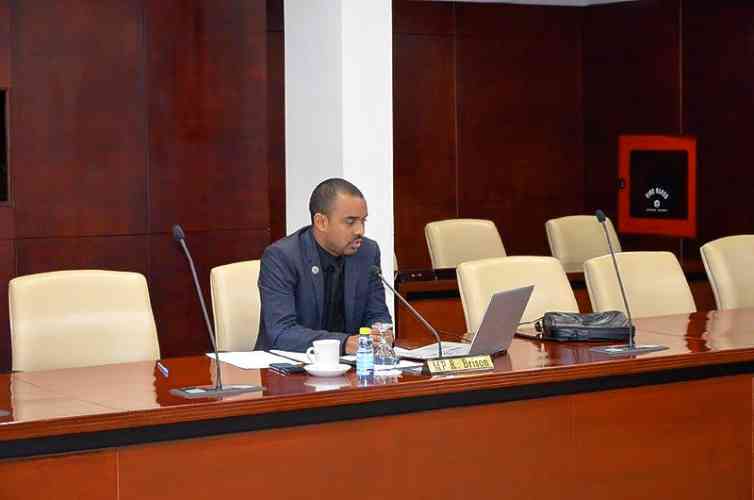 US MP Rolando Brison presenting his draft initiative law during a meeting of the Central Committee of Parliament on Wednesday.

Members of Parliament during the meeting.

PHILIPSBURG–United St. Maarten (US) party Member of Parliament (MP) Rolando Brison highlighted some of the major threats facing United Telecommunications Services (UTS) St. Maarten during the presentation of his draft national ordinance allowing government to sell the minority shares of UTS during a meeting of the Central Committee of Parliament on Wednesday.

If approved, the law would give government the green light to proceed with the sale of its 12.5 per cent minority shares of UTS.

Curacao, which holds 87.5 per cent, has already sold its shares to Cable and Wireless’ parent company Liberty Latin America.

Brison told his fellow MPs that one of the threats facing UTS St. Maarten include the dilution of shares, which he sought to explain via a brief video. Another threat is that the value of the shares can become lower with time, while another is that misinformation can cause “confusion” about the purpose of the sale.

He said also that UTS is diminishing in value as in 1999, the company was worth NAf. 900 million; in 2017, NAf. 400 million and in 2019 NAf. 340 million. Revenue from telecoms in the region also continues to fall and local jobs would be at risk without the certainty of a majority shareholder. The price tag of UTS can also plummet at any time.

Brison’s 10-page draft law contains articles focusing on the justification on why the law is necessary; an urgency clause; motivation for the sale of UTS and it outlines the financial consequences. Due to agreements with the Committee for Financial Supervision CFT, the funds will be required to go to old debts.

St. Maarten is expected to get some US $11.5 million from the sale and it is Brison’s hope that the funds be used to ensuring police officers are paid what they deserve, that affordable housing be put in place for residents and that funds go to General Pension Fund Administrator APS, which can help the fund return to a proper coverage ratio and dissuade the need for increasing the pension age to 65.

In outlining the strengths of the draft ordinance, the MP said it complies with the accountability ordinance; it takes into account the advice received from the Council of Advice and it makes the execution of the UTS sale for government easier.

In pointing out some weaknesses, he said, the law alone would not guarantee the sale of UTS as government still has a major role in finalising the process. He said it was more difficult as an MP putting together the draft initiative law, as the resources that are available to government are not available to MPs. He said also that it is an expensive process as legal persons and others have to be paid. He also stated that parameters can change at any time as the situation is very fluid.

Opportunities include that the funds can pay old debt and it is an adequate framework for other companies that would like to engage in strategic partnership in the future, such as TelEm for example.

In dispelling some common misnomers, he said, the St. Maarten branch of UTS is not the target of the sale, as St. Maarten owns 12.5 per cent of the shares of the entire UTS. He also said that transferring to another entity like TelEm does not avert risks and the job of UTS local workers will be secured with the sale of the shares.

The draft law takes into account comments made by the Council of Advice, which suggested that the motivation of the sale be enhanced, which Brison said was done. Another suggestion was that certain information that was available to government needed to be made available to Parliament and information was requested. Another recommendation was that the financial consequences had to be made clearer and there had to have been a stronger justification on the importance of the urgency of the law.

The next step in this process after the discussions in the Central Committee has been finalized, is for the discussion on the draft law to go to a public meeting where it will be debated and voted upon. The law will then have to be finalized and the process finalized. The “deal” can then be sealed with Liberty Latin America and an amendment made in the budget with the funds from the sale included.

Brison made clear that the law is only the authorization for the sale of the shares, paving the way for government to enter into negotiations and to strengthen a selling price. A budget change is still required if a sale is to be completed, which is outside the scope of the legislation. A budget change can be initiated by Parliament or Government as soon as the sale price has been formally signed by buyer and seller.

After a number of questions and comments from MPs on the issue, the meeting was adjourned and according to Chairperson of Parliament Sarah Wescot-Williams, given the urgency of the matter, she will, in consultation with Brison, set a date for the meeting to continue.