Home Local News Broad participation of islands at meeting on Dutch slavery past | THE... 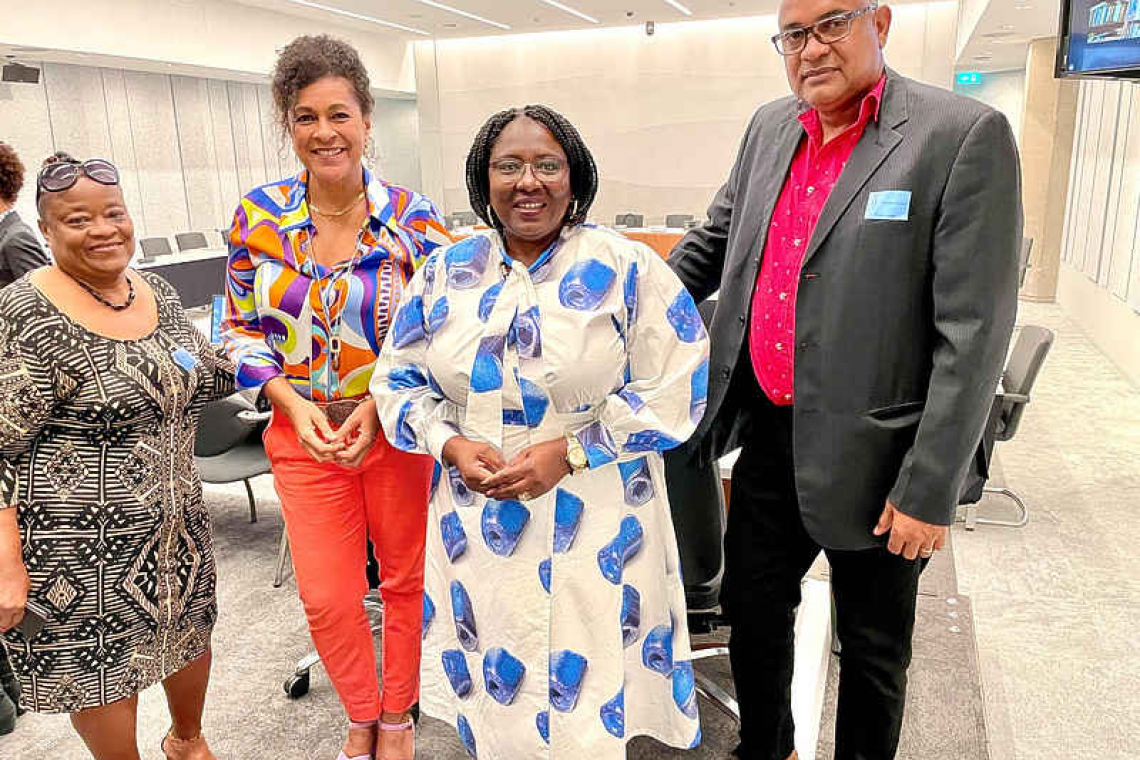 THE HAGUE–Twenty speakers, many hailing from the Dutch Caribbean, participated in the round table consultation in the Second Chamber of the Dutch Parliament on Monday to talk about the Dutch slavery past, the effects thereof on people to this day and how to go about the healing process. 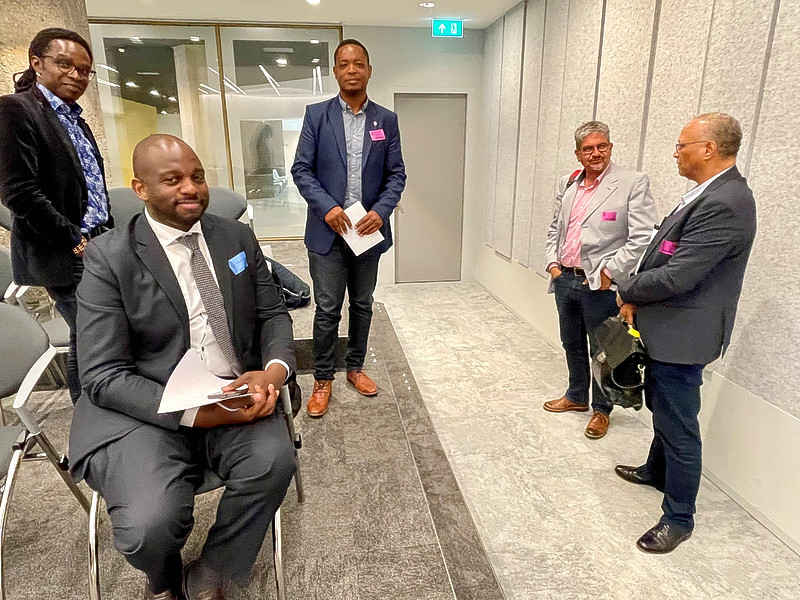 From left: Francio Guadeloupe of University of Amsterdam, Xavier Donker of Foundation Ocan, Saba Island Council Member Vito Charles, Glenn Thodé of University of Groningen and Ruben Severina of the Inter-insular Slavery Past Consultation at the round table consultation in the Second Chamber. (Suzanne Koelega photo) 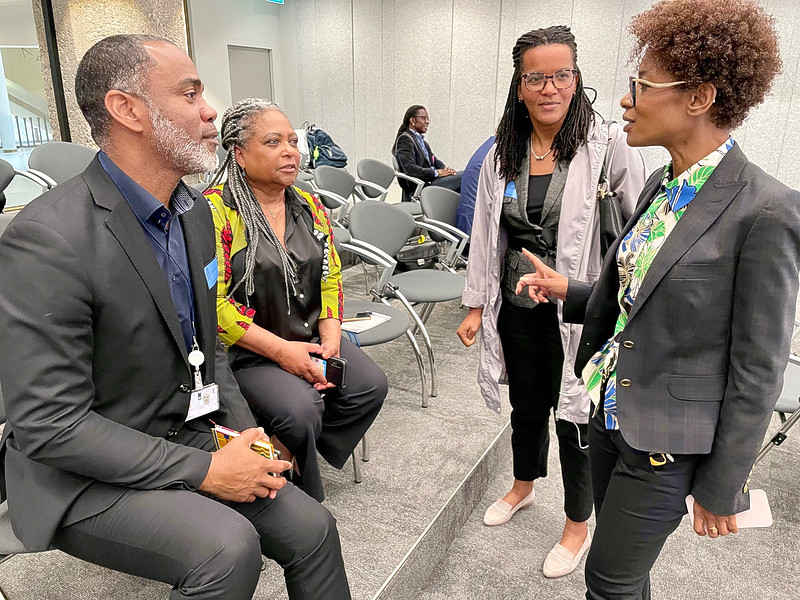 Member of the Second Chamber Sylvana Simons (right) talks with St. Maarten representatives, including Minister Plenipotentiary Rene Violenus (left) at the round table consultation about the Dutch slavery past. (Suzanne Koelega photo)

The round table consultation was organised by the Second Chamber’s Permanent Committee for Home Affairs and comes after the publication of the report of the Advisory Committee Dialogue Group Slavery Past in July last year. The Advisory Committee found it necessary that the Dutch State recognises that slavery and the slave trade were crimes against humanity, that it takes responsibility for this, that it acknowledges that the consequences of the slavery past are felt to this day and that it offers apologies.

One of the actions that the Advisory Committee proposed was to anchor the formal apologies and recovery in law to make this binding. Preferably this should be a Kingdom Consensus Law which allows the input of the Dutch Caribbean countries about the manner in which the Netherlands moves to a formal recognition, apologies and recovery. Chairperson of the Advisory Committee Dagmar Oudshoorn emphasised this during Monday’s round table consultation.

All speakers at the round table consultation agreed that apologies and reparations by the Dutch State were necessary. They shared the position of the Advisory Committee that recognition and an apology were necessary, starting with the formal acknowledgement of slavery as genocide, a crime against humanity.

“Many descendants of enslaved persons openly question why the Dutch government, more than 150 years after Emancipation, has not apologised for its role in the Atlantic Slave Trade and for the slavery in the Dutch Caribbean, and recognised these as crimes against humanity,” said Saba Councilman Charles.

St. Maarten MP Duncan, who attended via Zoom, had five recommendations in a “simple, non-exhaustive plea” to the Netherlands: acknowledge and apologise, make Emancipation Day on July 1 an official kingdom holiday, create a kingdom workgroup to develop curriculum and education materials, consider reparatory justice through the structural funding of projects that tackle poverty and climate change in the Caribbean, and improve kingdom relations through improved dialogue, mediation and establishing a Dispute Regulation.

Asked by Members of the Second Chamber when would be a suitable time to offer apologies, Duncan said that an apology could happen “at any time,” as long as it was sincere. For Francis, the apology cannot come soon enough. “The right time for an apology, in my opinion, was yesterday,” she said. Charles said that the best time was “yesterday and now.”

Charles said it was “incomprehensible” why the discussion about an apology was still necessary. “The question is, do we need an apology to create awareness or do we have to create awareness to have an apology?” MP Duncan agreed that there should be more attention for the acknowledgement of history in relation to slavery and the slave trade.

Scientist Guadeloupe said the Netherlands should offer “proactive” apologies to Afro-Dutch Caribbean and Afro-Suriname people. This should be tied to several actions: intensifying initiatives to strengthen the substantive citizenship of Afro-Antilleans and Afro-Surinamese in the kingdom, establishing a kingdom fund for projects to strengthen the position of Afro-Antilleans and Afro-Surinamese, and extensive collaboration between the Netherlands and the Dutch Caribbean to improve education, social facilities, employment, good governance and environmental protection on the islands.

Healing will take several generations, said Guadeloupe. “You cannot expect that the former enslaved people after the abolition of slavery on July 1, 1863, all of a sudden changed into a buzzing, enterprising community. The black population for the largest part is still dealing with the complexes of the times of slavery.”

Councilman Charles made a plea to create more awareness for the slavery past. He said that during discussions in the Saba community in 2021, it was felt that when it came to slavery, there was an attempt to minimise, misinform and deny the experience of slavery.

“Despite the attempts to bury the memory of slavery, it has to be acknowledged that there are elements of racism, if not systemic racism, still present on the island. We have learned from global events surrounding racism and discrimination that we cannot change our history’s legacy if we don’t first confront it,” said Charles.

Government Commissioner Francis, who was wearing a white dress with images of blue beads, proudly and with emotion, announced that Emancipation Day would be celebrated on St. Eustatius as an official national holiday for the first time since the adoption of a motion by the Statia Island Council in 2017.

Ocan Director Martijn showed much emotion when he spoke about rehabilitation for Curaçao’s hero and freedom fighter Tula, who was murdered in an atrocious way in 1795. Martijn said the 350 years of slavery was a period of “greed” that resulted in genocide. “People were displaced, degraded, raped, tortured, marked, locked up, starved and murdered.”

According to Martijn, one cannot speak of the slavery past as long as there is no formal recognition, rehabilitation of the freedom fighters, formal apologies made and compensation agreed upon. All people in the kingdom should be recognised as equal, and all who have suffered exploitation and crimes against humanity should be assisted to have a decent life.

Ocan also made a call for investing in the islands and having true collaboration within the kingdom. Martijn called it “a crying shame” that after 160 years since the abolition of slavery, still no remorse or formal recognition had been expressed by the Dutch State.

Ruben Severina emphasised that Dutch Caribbean community organisations want to be included in the process as equal partners. “We will not accept dominance by the Netherlands in the execution of the recommendations of the Advisory Committee Dialogue Group Slavery Past.” Severina asked the Second Chamber to see to the implementation of the committee’s recommendations.

Speakers expressed gratefulness for having been invited to the round table consultation. “I am happy to be here at the discussion table. We are ready and prepared to dialogue. It is important that we as direct descendants of enslaved people are involved. We must be part and parcel of the process if we are to have true healing. So much time has already been lost. We must do right by those who have suffered,” said Francis.

The Committee for Home Affairs will be visiting Bonaire, Curaçao and Suriname this summer as a follow-up to the round table consultation.