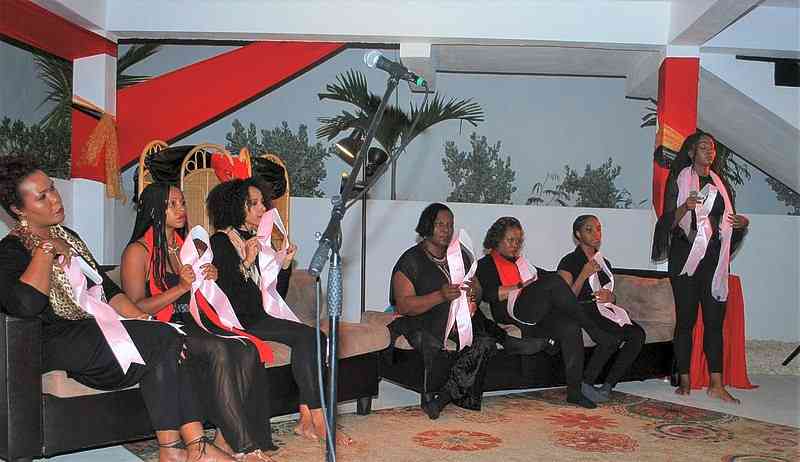 Performers at The Vagina Monologues.

ANGUILLA–Theatre enthusiasts and the simply curious filled performance seats at the Paradise Cove Hotel during the recent Anguilla Women’s Week celebrations and then again on Friday, March 23, at the Magic City Entertainment venue by popular demand, to experience the stage play entitled The Vagina Monologues which directly speaks to topics rarely addressed on stage. The play was directed and produced by Collette Jones-Chin, owner of Senoj Creations.

The original play, written by Eve Ensler and presented off-Broadway 22 years ago at the Westside Theater, New York City, delved into consensual and non-consensual sexual experiences, body image, genital mutilation, direct and indirect encounters with reproduction, sex work and several other topics through the eyes of women of various ages, races, sexualities and other differences, all of which are still very relevant today.

In addition to the original stories presented in the play, seven of the 21 stories were written by the producer and added so as to include the nuances of Caribbean culture and its hot-topic issues, using real stories from interviews she had with women. Seven actresses seamlessly transitioned from one story to the next, delivering flawless performances that were both funny and heart-breaking. Jones-Chin initially produced this play in 2007, and has previously taken it on tour throughout the Caribbean. She hopes to take the current version on the road again with the Anguillian cast, who she said “were as good as any professional cast, with an element of class and elegance that was awesome.”

Jones-Chin is a visual artist who has been writing, acting and producing since she was a young girl in Guyana. She re-located to Anguilla in 2007, and in addition to teaching arts at a local private school, she manages Stages Anguilla, a theatre arts group comprised of approximately 50 children ages seven to 18 who represented Anguilla at the Caribbean Festival of Arts Carifesta 2017 in Barbados.