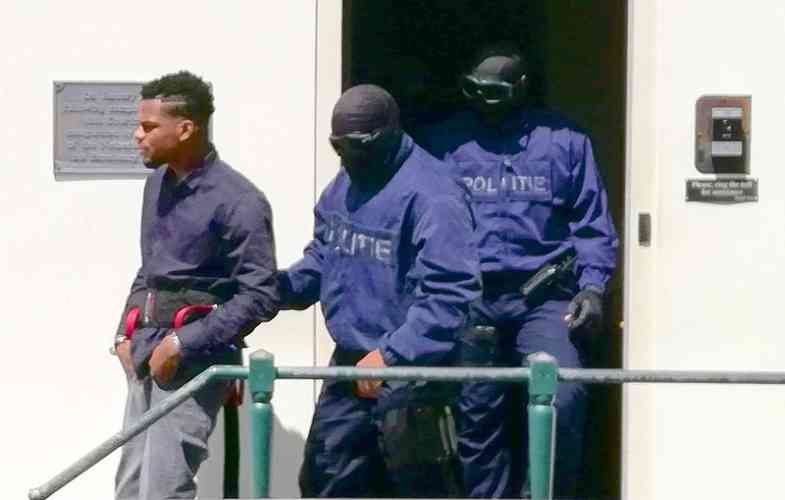 Members of the Police Arrest Team escorting Hashantley Fulgencio Martina out of the Courthouse. (File photo)

PHILIPSBURG–The Court of First Instance found brothers Hashantley Fulgencio Martina (28) and Hensley Hilarion Martina (24) guilty of the murder of Francis W. Brunache in Hope Estate on January 24, 2017, and sentenced them both on December 12, 2018, to 25 years in prison. Both brothers deny they were involved in Brunache’s death. A pro-forma hearing in their appeals was held Thursday.

Brunache was killed in his car, which was parked at Pica Shell Road in Guana Bay. He was rattled by bullets fired from a semi-automatic weapon, in what the Prosecutor described as a “cold-blooded reckoning” in a residential area where bystanders could have easily become victims. The murder was possibly drug-related.

During last year’s hearing of this case in the Court of First Instance, the Prosecutor’s Office requested 24 years for Hashantley and 22 years for his brother Hensley Martina.

In the verdict the Judge noted that by law prison time for murder starts at 18 years. The judge said this case involved the strategically, cold-blooded murder of Brunache on a public road in a densely-populated neighbourhood with a semi-automatic rifle. Therefore, a long prison sentence was justified, the Judge said.

The brothers denied their involvement in the gangland-style killing. Their lawyer Marije Vaders primarily built her clients’ defence on the mistake made by police investigator J.V.G.

In using wiretapped telephone conversations as evidence in this case the Prosecutor’s Office had established that Hashantley would have been in the car that was used in the killing. However, early October it emerged that a police detective had made a mistake in the voice recognition. The voice which was recorded minutes before the murder did not belong to Hashantley, who speaks with a Curaçaolenean accent, but to co-suspect Kathron Fortune, who hails from Grenada.

During Thursday’s appeal hearing, Vaders requested, via video-conferencing from Curaçao, to hear the police investigator and anonymous witness “X1” for additional questioning. The Court of Appeals allowed the hearing of these two witnesses by a Judge of Instruction.

The Solicitor-General said Thursday the Prosecutor’s Office may not consider it “opportune” to prosecute Fortune in this case. In the “Mars” investigation, the Prosecutor’s Office called for a life-sentence for Fortune, who is accused of killing two men in a hotel room at Simpson Bay Resort on December 5, 2016. The Court of First Instance will give its decision in that case on June 5.

The appeal cases of the Martina brothers will proceed with a second pro-forma hearing on June 20, via video-conference. The actual appeal hearing will take place after the summer break, presumably in October.