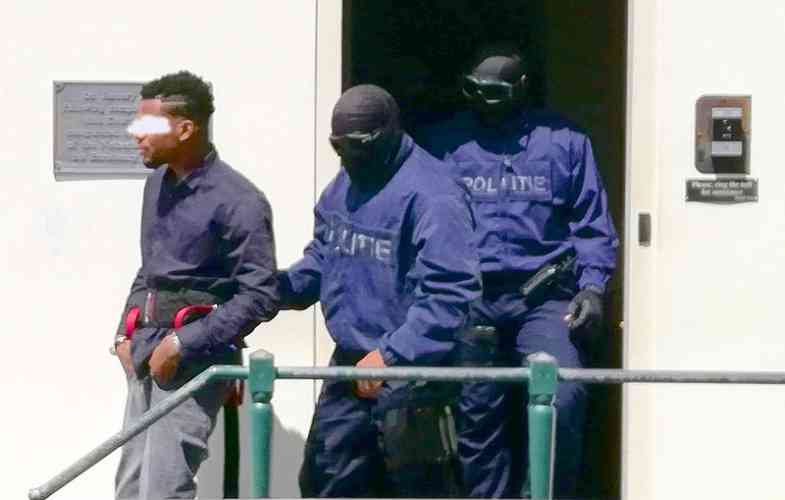 PHILIPSBURG–The Judge in the Court of First Instance on Wednesday ordered the release from pre-trial detention of one of two brothers suspected of involvement in the Brunache murder case.

Franky Brunache, who was a suspect in the “Octopus” case involving the buying and selling of votes among inmates at the Pointe Blanche prison during the 2014 parliamentary election, was murdered in Hope Estate on January 24, 2017.

Two brothers, H.H.M. (23) and H.F.M. (27), are suspected of involvement in the killing. According to the Prosecutor’s Office, witness statements, video-camera images and forensic evidence consisting of traces of gunshots found in the alleged getaway car will be used as evidence against the two suspects.

The Prosecution will also use wiretapped telephone conversations as evidence in this case. Based on one of these conversations, the Prosecutor established that H.F.M. would have been in the car that was used in the drug-related gangland-style killing. However, earlier this week it emerged that a police detective had made a mistake in the voice recognition.

According to the Prosecutor, it emerged that the voice which was recorded minutes before the liquidation did not belong to H.F.M., who speaks with a Curaçaolenean accent, but to Kathron “Kuchi” Fortune, who hails from Grenada.

This week, Detective G. was held by the National Detectives for the alleged falsifying of statements against payment, the Prosecutor said Wednesday.

“There is no reason to assume that G. has deliberately done this [making a false report about the telephone conversation – Ed.],” the Prosecutor told the Court, adding that Officer G. was held under the suspicion of having taken a bribe in a different case. “The fact that G. may have committed a crime in this case, does not mean that he did not do his job in every case.”

The Prosecutor said the case of mistaken identity did not deserve a “beauty prize,” for which he said he was willing to put on the hair shirt. According to him, the state of affairs should not lead to H.F.M.’s release from pre-trial detention, as he and his younger brother are also suspects in the double homicide of January 6, 2017, in Sucker Garden.

Taheba York (31) and his girlfriend Sabrena Martes (23) were both found dead in their vehicle. According to the Prosecutor, it emerged that the same weapons with which York and Martes were killed were also used in the Brunache murder.

The Prosecutor said the two are charged with very serious crimes, among which a “brutal” liquidation. In both crimes an AK-47 firearm and a semi-automatic pistol were used. According to the Prosecutor’s Office, the Brunache murder was committed by the two brothers, Fortune, and a fourth suspect identified as “X1.”

Lawyer Marije Vaders pleaded for the release of both her clients, who uphold their innocence and deny they were the shooters who took Brunache’s life.

According to the Prosecution, the two have declined to give any statement throughout the investigation. Also, during Wednesday’s procedural hearing the two were reluctant to answer any questions.

Their lawyer said her clients have already spent 19 months and 18 days in detention, which is a violation of the European Human Rights Treaty.

Vaders said that Fortune, who is currently detained in the Netherlands, was already mentioned as a possible suspect earlier on in the investigation.

“This is wrong,” the lawyer said. “My clients have been duped by mistakes made in this investigation. My clients were not the ones who fired shots from a car. They should be released as a result of G.’s false statements. G. played a big role at the start of the investigation, for instance where the suspicions against my clients were concerned. The false reports may not be at my clients’ expense,” she said.

The Judge expressed his appreciation of the fact that the Prosecutor’s Office had come clean about the officer’s false report, which otherwise could have been used for evidence.

The Judge suspended the court hearing until November 21 and said he expects an official statement from the Prosecutor’s Office as to why it thinks there is no connection between the “unreliable officer” and the reports drafted in the Brunache-murder investigation.

He said H.F.M. is charged with serious crimes, but serious mistakes were made in his case. Therefore, his pre-trial detention was suspended until the November 21 hearing. In the meantime, he will not be allowed to commit any punishable acts. His passport will be seized, he should be available for questioning by the police and the Prosecutor’s Office, and he must report at the Philipsburg Police Station Mondays and Fridays at 9:00am, the Court ordered. His brother H.H.M. will remain behind bars.