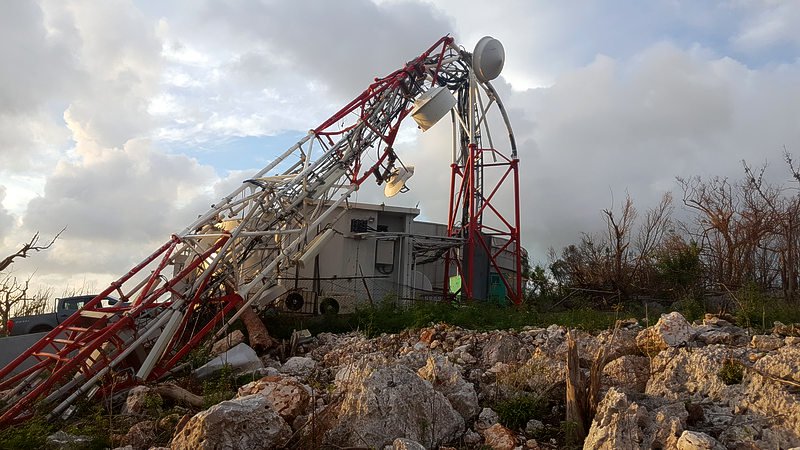 PHILIPSBURG–Bureau Telecommunications and Post (BTP) St. Maarten says creating one infrastructure will be the most efficient and cost-effective way to restore the telecoms infrastructure in St. Maarten, which was damaged extensively by Hurricane Irma on September 6.

BTP said in a press release on Thursday that major investments have to be made in rebuilding the telecom infrastructure in St Maarten. BTP has been proactively reaching out to telecom operators and service providers to gather additional information and find out where BTP can assist with restoration efforts.
BTP Director Anthony Carty said based on the magnitude of the disaster and the damage assessment conducted for the telecoms industry, “We do not believe that doing all restoration efforts on your own as a communication provider is the best way to move forward. Now more than ever, we feel the need for far-reaching collaboration between the Government, regulator and communication providers.”
As a result of Hurricane Irma, 13 major cell towers came down, more than 30 micro-cell-sites were severely damaged and in total close to 65 per cent of the telecom networks in St. Maarten was compromised. “Due to these major infrastructural damages, phone, Internet, broadcasting and trunking services were jeopardised or limited available in the Irma aftermath,” BTP said.
It said it has always been a proponent of infrastructure-sharing in the telecom industry, as also explained in an official publication by BTP on February 13.
“Infrastructure sharing is the mechanism of sharing passive and/or active telecom infrastructure amongst telecom service providers, to decrease cost (CAPEX and OPEX), improve the quality of service, increase coverage and potentially resulting in lower retail prices, whilst having a positive environmental impact due to less duplication in infrastructure,” BTP said.
Carty: “To even take it one step further; we are still a strong advocate for the establishment of a neutral entity that operates and maintains a core fibre-optic infrastructure on the island on which licensed network operators and service providers may render communication applications, services and content to residents and businesses.”
This is in line with the conclusion of the 2016 study “FttX Policy Outline,” which was carried out by BTP with the involvement of all large communication providers: “The better approach for the St. Maarten society, economy and the telecom market is to combine resources in a nationwide fibre network upon which all present and future network operators, service and content providers can deliver services to their customers in an indiscriminate fashion.
“Considering the re-building stage that we are in right now, we believe that this study even becomes more relevant if our intention is to restore communication services in St Maarten better and faster.
“In 2016 BTP presented a position paper to the previous Minister of TEATT [Tourism, Economic Affairs, Transport and Telecommunications – Ed.] and reiterated its position on the one-infrastructure model and the development of a national broadband policy (NBP), to the current administration.”
Superfast Internet, better coverage, more reliable (mobile) phone services and state-of-the-art TV solutions, against the most affordable rates, are long overdue in our society, it was stated in a press release.
Carty: “We do believe that we can achieve this, but only if all stakeholders are willing to work closely together and make the interest of the country and the end-users the highest priority. Alone we can do so little, together we can do so much.”