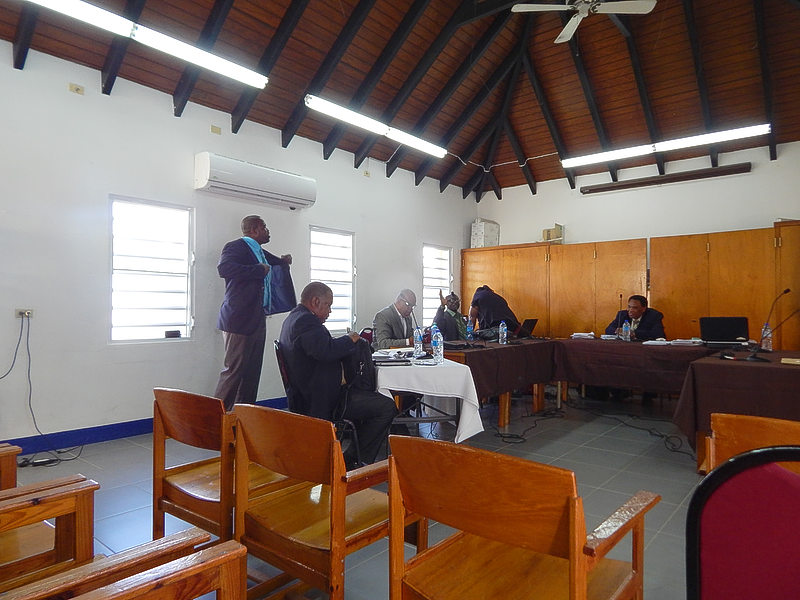 ST. EUSTATIUS–An extraordinary meeting of the Island Council of St. Eustatius on Friday about the 2017 budget came to a standstill after Council Chairman Julian Woodley said should the Council pass the budget as is, it would be turned down by the Committee for Financial Supervision CFT and end up right back in the lap of the Council. This did not sit well with all Council members who spoke out about the closure of the session.

Woodley said since the amended NuStar [Storage and transhipment of crude oil and petroleum products company – Ed.] agreement is not yet ready, it is not fair to take a decision on budget, because that decision hangs heavily on the amended agreement. The agreement has to come back to the Executive Council with the advice from the Government lawyer before it is tabled in the Island Council. The next step would be for the Executive Council to sign and adjust the budget accordingly.

Councilman Clyde van Putten said of Woodley’s stance: “I get the impression that games are being played. The Island Council does not need advice from the Government lawyer to pass a budget. With the financial agreement with NuStar money is already coming. Just last week, US $138,000 was sent in a check from NuStar.”

He asked Woodley to point out in the law where a Government lawyer could determine whether a budget could be approved.

Van Putten labelled the move by Woodley as “unprecedented” and intends to consult with the legal personnel.

He said Woodley unilaterally shut down the functioning of the Island Council and prohibited it from doing its constitutional duty by not allowing the discussion on the budget to go forward.

Van Putten attempted to put a motion on the table to discuss the budget, but he was rebuffed by Woodley.

Councilman Rueben Merkman said the issue the Government lawyer brought forward was duly handled and corrected by the Island Council. The first time the NuStar agreement was sent up to the lawyer a response was received within a week and a half, but now it has been a month and no word has been received. The situation is “unacceptable,” he said, questioning what happens if the Government lawyer decides to take a year to give his advice on the agreement.

The Island has been operating without a budget since the start of the year and every month a request has to be made to Dutch Minister Ronald Plasterk for the go ahead to pay civil servants, said Merkman.

Councilman Koos Sneek said the frequency of the extraordinary meetings is beginning to hinder him, as he had to reschedule a flight to be able to be in the meeting. So far, he said there has been no positive advice concerning the NuStar agreement from the Government lawyer.

On Tuesday, a court case brought by Statia Commissioners against Woodley about the NuStar agreement will be held in the judge.