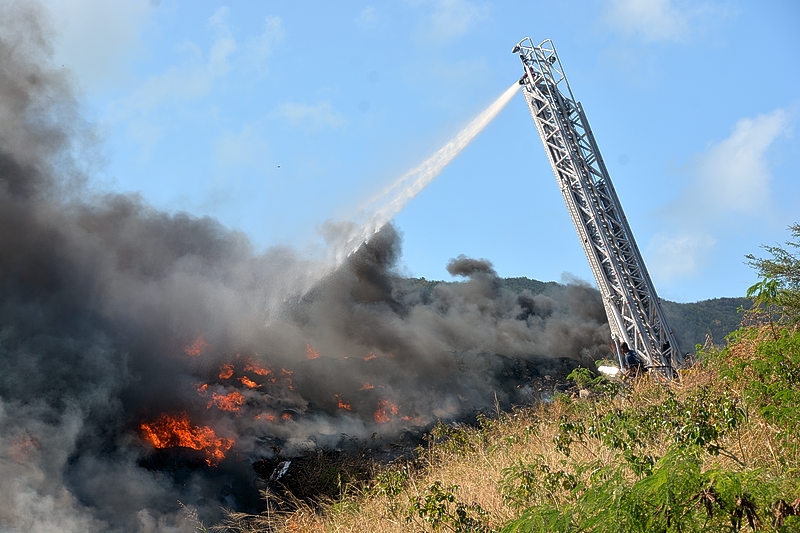 PHILIPSBURG–It took two fire trucks to put out the blaze on the Sanitary Landfill on Wednesday afternoon. The air in Philipsburg, Madame Estate, Over the Pond and surrounding areas was affected by black smoke emitted by the tire fire that lasted for hours.

The firemen had difficulty at first to get water to the blaze and asked GEBE to provide more pressure for the department. GEBE complied with their request and interrupted water services to surrounding areas. Firemen were able to get the fire under control. On-duty Fire Officer Antonio Gibbs commended the firemen for their hard work to control the blaze.

Minister of Health Emil Lee shares the concerns and outrage of the public and expressed the need for this matter to be addressed post-haste.

“The way the dump was managed and continues to be managed is clearly not working, posing severe threats to the health of the population. This matter needs to be addressed structurally. This cannot be solved overnight, but measures need to be implemented immediately. Minister Emmanuel and I have been discussing a review of protocol for the management of the dump. I have recommended bringing in professionals in landfill management to make recommendations,” said Lee.

He urges the population in the affected areas to remain vigilant and take all the necessary steps to ensure that they are safeguarded from the chemicals carried in the smoke plume.