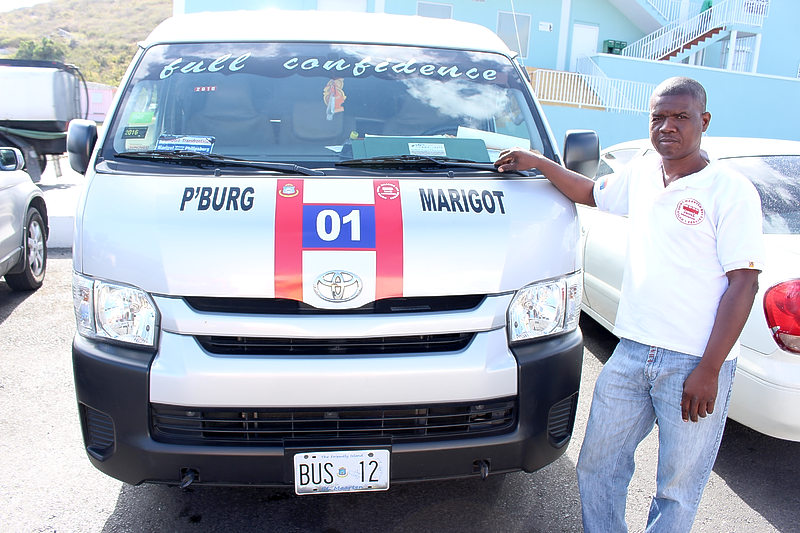 PHILISBURG–United Bus Association continues its fight to regulate public transportation on the island. The group has already marked some of the buses with clear signs sprayed on the buses with colours indicating their routes.

Association President Claude Omeus showed off his bus with the red Philipsburg to Marigot sticker. The bus is marked on the front and back, making it easy for persons to see it and know where it is heading.
“I want to first congratulate the new Minister of Tourism, Economic Affairs, Transport and Telecommunication (TEATT) Mellissa Arrindell-Doncher for taking up the post. I wish the Minister well along with her cabinet,” said Omeus on Thursday.
“With that said, I requested a sit-down with the new Minister and hope that she meets with the Association soon. Public transportation needs the attention of Government and this colour-coding system was presented to the previous Ministers and we hope to get the blessing of this Minister also. We look forward to working with this Minister,”
The Association booked in a letter to the cabinet last week and attached its plans to the letter. In the meantime, bus drivers who are not part of the Association are requested to get in contact with the group. Omeus hopes to convince Government to make the colour code mandatory for all buses operating in St. Maarten.
In consultation with the TEATT Inspectorate, colours and routes were agreed on in 2016. The routes discussed and approved are: Philipsburg-Marigot with the colour red, Philipsburg-Maho with the colour purple, Philipsburg-St. Peters is green, Philipsburg-French Quarter is yellow and Philipsburg-Pointe Blanche-Sucker Garden is pink. A black off-duty sign also will be developed for all buses to prevent any confusion with buses that are in different districts when not on duty.
The Association plans to discuss the proposed policy with Government to come up with a joint regulation to which all buses will have to adhere. The Association does not represent the majority of bus owners and will not be able to regulate this policy by itself.
Omeus commended Minister of Public Housing, Spatial Planning, Environment and Infrastructure VROMI Christophe Emmanuel for initiating plans to pave Back Street. “This is what we need, somebody who will face the problems head-on and doesn’t do too much lip service, but delivers what he promises. I commend the Minister and the Association is also willing to sit down with the Minister and talk about the soon-to-be-developed bus stops,” said Omeus.
Medical insurance for Association members remains a priority and some drivers who have paid the premium package from NAGICO Insurances started their plans late in September. Omeus is once again calling all prospective members to sign up and become members of United Bus Association.