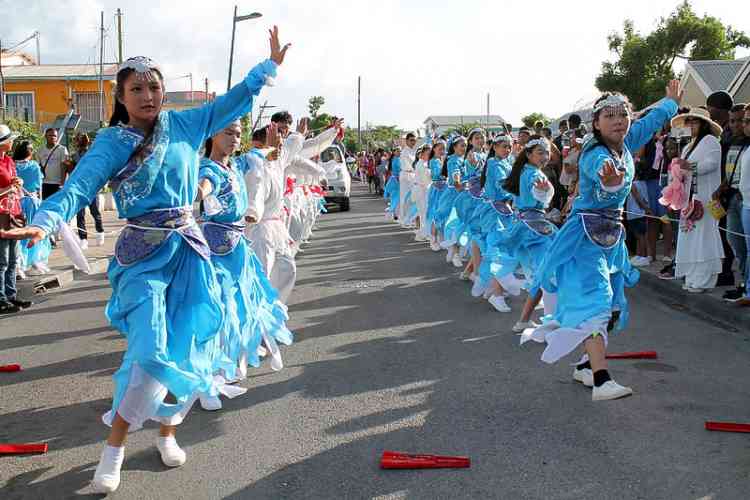 MARIGOT–French-side Carnival committee FCDSM launched a shortened five-day 2018 Carnival on Saturday night with a pre-parade on the waterfront followed by the Children’s Parade on Sunday, proving that nothing stops the people’s Carnival from going ahead, not even Hurricane Irma.

A Carnival seemed inconceivable five months ago, given the devastation from the hurricanes, yet a determined and hard-working committee made sure that “We Culture, We Fête” continues, and surely jamming is the best therapy in the healing process.

The weekend got off to a rousing start with no perceptible loss of quality. There might be fewer troupes, but the sequins, feathers, colours, Carnival drummers and deejays accompanying the troupes ensured the Carnival atmosphere is very much alive.
Saturday’s pre-parade started from Louis Vanterpool Stadium at 7:30pm for a short procession down Rue de La République to finish on the waterfront. Carnival Queens, stilt-walkers and fire-eaters led the procession, followed by New Generation Status STM Band, Locomotif, and troupes with revellers holding on to their elaborate feathered headdresses in the strong wind.

Also, in the procession were Miss Teen 2017 Tasyanna Clifton, Junior Carnival Queen 2017 Doryanna Pascal and Senior Carnival Queen 2017 Shaina Galvani.
The entire parking area and taxi stands on the waterfront by the ferry terminal were turned over to the public for the evening’s entertainment, and local food and refreshment stands lined the square. Emcee for the evening was Dutty Sham. He first introduced singer Malaïka Maxwell who sang her version of the St. Martin anthem. Other artistes were due to perform on the huge stage.

Opening remarks were made by First Vice-President Valérie Damaseau and President of the French side Carnival committee Luciana Raspail, who also joined in the pre-parade.
“The opening of Carnival shows the resilience of our people,” said Damaseau. “Carnival is you, Carnival is me, but importantly it is us. It’s our culture. You can count on the support of the Collectivité to create what was long overdue. We applaud you on the great line-up of artistes, especially under such circumstances. Our artistes are beyond talented. We say ‘congrats’ to Lucian Raspail and her entire team.”

Raspail said in her remarks: “St. Martin must smile again, and St. Martin is smiling again. This 2018 edition of Carnival is special in many ways. But without the commitment, the energy, and the strong will of my FCDSM family, we would not have made it and I thank them warmly for the tremendous work they have done despite the situation and to let them know how grateful I am for the confidence they entrusted in me.
“I also want to thank the partners of Carnival for their support; the Collectivité, St. Martin Tourism Office, Presidente distributed by CC1, UTS, Sound Masters, BPS Services, Sparko Services and Madd Design.

“Carnival is culture, and it is the most popular cultural expression of our heritage. The streets are the stage for a display of splendour and creativity.”
Sunday’s Children’s Parade had some five troupes participating. The procession started from the Bellevue roundabout and made its way along Rue de Hollande to finish back on the waterfront. The troupes included Grain D’Or, Colourful Smile Again, Les Manguiers, the FCDSM troupe, the Chinese Community Foundation of St. Maarten and Marie Amelie Leydet School.

The Chinese troupe may well be a strong contender for the best choreography award with their disciplined and impressive performance.

Monday is Jouvert Morning leading into the “We Showdown” on the Marigot waterfront. The Mardi Gras parade is on Tuesday, February 13, starting from the Agrément roundabout at 2:00pm. Wednesday is the last lap, followed by the Black and White Show at 8:00pm.