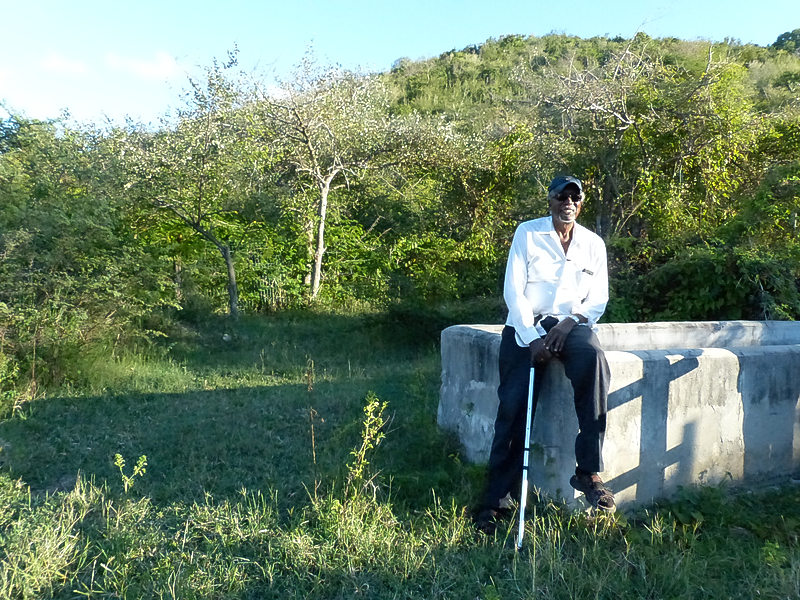 by Sanne Rotmeijer
PHILIPSBURG–This summer the second round of the National Dialogues is expected to start in St. Maarten. Various representatives will be personally invited to jointly address national issues of social, economic, cultural and environmental concern. The dialogues are a crucial part of the National Development Plan (NDP), a joint project of the St. Maarten Government and United Nations Development Programme (UNDP) to support the nation building process of St. Maarten.

The upcoming dialogues give occasion for sitting down with key figures within the NDP and with important spokespersons engaged in imagining and advocating St. Maarten as a nation throughout the past decades. 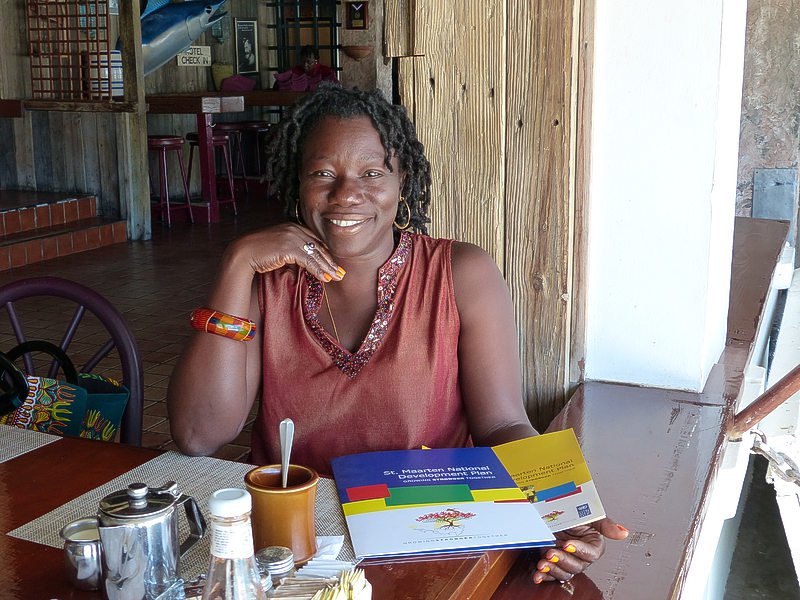 Having started in September 2012, the St. Maarten NDP project is designed to support the strengthening of governmental institutions for nation building with a special focus on delivering a national vision for St. Maarten through democratic dialogues. Senior Policy Advisor and Coordinator of the NDP project, Okama Ekpe Brook, explained that the project is the natural transition of the previous UNDP capacity building programme for the restructuring of the former Netherlands Antilles. “On 10-10-10 the birth of the country St. Maarten was witnessed. The new status comes with responsibilities, challenges and opportunities within the constitutional context of the Kingdom of the Netherlands.” Ekpe Brook has been involved in the restructuring process, first in Curaçao, later in St. Maarten.
“The St. Maarten NDP project hasn’t been without struggles,” Ekpe Brook admits. “In 2012 we immediately started with organizing dialogues in which people from the twelve districts of St. Maarten participated together with representatives from the Government and private sector.” Although the dialogues were inspirational and productive, they were eventually put on hold. According to Ekpe Brook, the main reason for this was the lack of strong political institutions. “Dialogue is a proven tool for development of a country, but you need strong governmental institutions. The reality of St. Maarten, however, is that in 2010 the new country had to start from scratch as Curaçao had always been responsible for the institutions holding the Netherlands Antilles together. 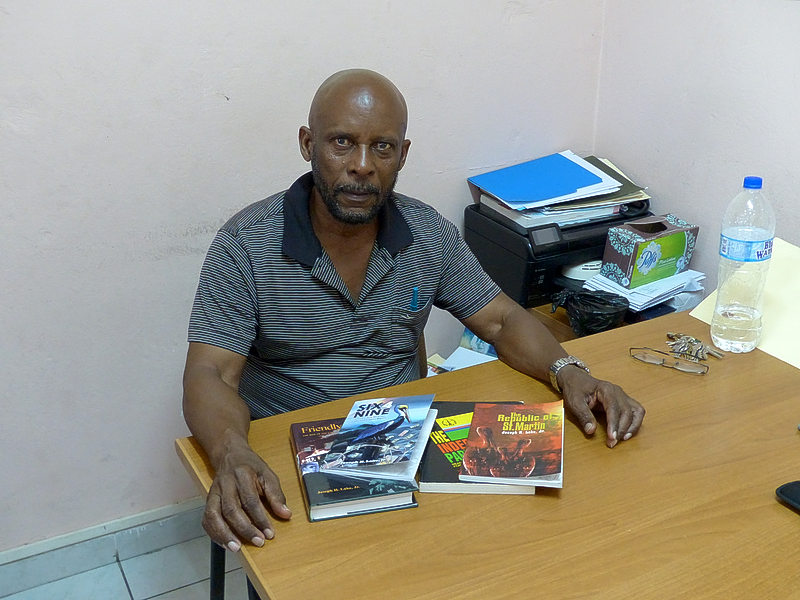 Political institutions in St. Maarten did not provide a stable building ground for developing and implementing an NDP at that time,” Ekpe Brook states. “After completing six dialogues, we decided to firstly focus on strengthening St. Maarten’s institutions and working on a shared government perspective on development, which could serve as a starting point, also and eventually, to involve the people of St. Maarten.”
Actively involving the people, however, appeared not to be easy during the dialogues in 2012. One of the main reasons? The lack of trust among dialogue participants that the government would act in the interest of the people. Youth representative in the NDP project, Dwayne Griffith, explains: “People don’t have any expectations of the NDP, as they tend to link the plan with the elections. Around elections, and we have seen many the last couple of years, politicians make empty promises. When they are elected nothing happens.” Griffith says that these experiences have conditioned the people to think on a very short term. “They don’t think about the future of their country, where St. Maarten can and should be within 10 to 15 years from now, but what they can get now, here, for themselves.”
Despite these challenges, Ekpe Brook argues that the NDP project is very much needed in today’s St. Maarten: “We, as a country, now have the opportunity to reflect on the current situation. What does St. Maarten’s autonomous status mean for the island and its people? Who benefits and should benefit from the constitutional change? And, who is accountable for achieving set goals? Because, in the end, the whole idea of the new status was that it would benefit local people!”
Talking to Joseph H. Lake Jr., author and lifelong advocate of independence for St. Maarten and founding president of the Independence for St. Martin Foundation, it becomes clear that not everyone agrees with the advantages of the autonomous status. He argues that in order to truly develop as a nation, St. Maarten people have to take their destiny into their own hands. “This means; be responsible, become independent and go out there in the world on your own.” As long as St. Maarten is tied to the Kingdom of The Netherlands (and to France – as Lake Jr. is talking about the island as a whole), the interests of the latter will always prevail above what is important for St. Maarten, argues Lake Jr.
Since the last referendum in 2000 and the constitutional reforms on 10-10-10, Lake Jr. has seen a growing awareness of the need to become independent in order to achieve national development. “A lot of the fear that people used to have in the past based on thoughts like for example; ‘you cannot be independent because who is going to take care of you?’ has evaporated over the years.” According to Lake Jr., people are better educated and more aware of the cultural differences between
St. Maarten and The Netherlands nowadays.
Prior to the constitutional reform in 2010, Curaçao served as a buffer between the Dutch and the St. Maarten culture. Now that this buffer is gone, St. Maarten people are confronted with cultural clashes and, more importantly, the limited spaces within the Kingdom to have a say. In an ongoing relationship of colonial dependence, Lake Jr. argues, there is no space for true development of St. Maarteners as a people. “You cannot say you have a national identity as long as you don’t want to be independent.”
Whereas the NDP project operates within the constitution of the Kingdom of the Netherlands, Lake Jr. questions the constitutional framework itself in order to achieve national development. Both viewpoints, though, put emphasis on the importance of formulating and strengthening a St. Maarten national identity. According to Ekpe Brook, a country is responsible for providing its people a clear cultural identity perspective: what defines you as a cultural, ethnic group and determines national symbols, like for example a language, an anthem, and national heroes.
In order to create this cultural identity perspective in today’s St. Maarten, one should embrace its new reality, which is one of diversity. According to Ekpe Brook, St. Maarteners have always been known as people who work together, also with newcomers. For this reason, St. Maarten received its title of ‘The Friendly Island.’ “However, it is widely shared among
St. Maarteners that this friendly mentality has changed,” says Ekpe Brook. “In a very short period of time the population of
St. Maarten has exploded. Too much migration has diluted cultural and ethnic identities on the island. New generations are brought up without any sense of belonging.” According to Ekpe Brook, openness to people from different cultures is highly needed together with creating the national do’s and don’ts for newcomers. “Whoever comes into St. Maarten has to respect this.”

This vision is shared by Leopold James, founder and president of the grassroots St. Maarten Nation Building movement, who has previously been involved in the NDP project. In a conversation with him on the land that traditionally belongs to his St. Maarten family, he stresses that nation building should be based on a combination of preservation of the national identity of indigenous St. Maarteners and inclusion of newcomers. “Thirty years ago, nobody cared about St. Maarteners. We had to fight to reinforce our identity, because you cannot include others when they don’t respect and acknowledge you. First, we had to make our position extremely clear.”

According to James this was a real battle back then. Now, however, the time has come to focus on inclusion next to preservation. “We should not only focus on preserving for preserving’s sake. This is a problem with a lot of St. Maarteners right now, they only focus on preserving!” During the past decades St. Maarten’s population has become more diverse than ever before. As a biologist James states that “when you have diversity in life, especially cultural diversity and ethnic diversity, it can go two ways in a society: it can be a time bomb or it can be a blessing. It depends on how you deal with it.” James argues that when diversity is not managed, you get fraction and resentment. “Instead, we should ask; what do we have in common? Because the way St. Maarten’s nation will look ten years from now will be very different from our population now. We have to change in a natural and gradual way.”
“I want to see change!” states youth representative Griffith. “Most importantly, a change of the people’s mind-set.” According to him, people envy each other instead of focusing on finding opportunities to grow together. “There is segregation in
St. Maarten and hate towards different cultures. It’s time that our community takes responsibility by thinking across borders. We need to become global citizens and learn to speak up! Only then, we can create a future for St. Maarten by the people, for the people.” According to Griffith, the National Dialogues this summer could be a good start for achieving this.
More info about:
The St. Maarten National Development Plan project: www.sintmaartengov.org
The St. Maarten grassroots Nation Building Movement: www.stmartinnation.org

Source: Daily Herald
By the people, for the people