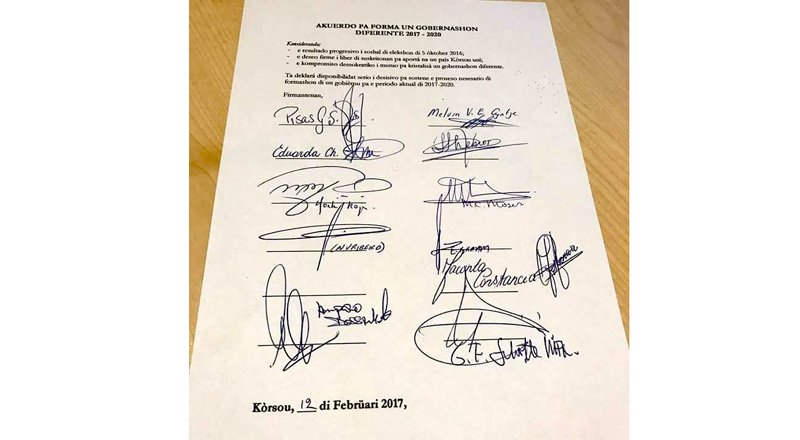 WILLEMSTAD–The Government of Curaçao collapsed on Sunday confirmed Prime Minister Hensley Koeiman. His cabinet resigned, but moved to dissolve Parliament and call early elections on April 28. The MAN/PAR/PNP/PS government was just seven weeks into its term.

On Sunday the two fraction members of “Pueblo Soberano” (PS), Melvin Cijntje en Sherwin Leonora indicated in a letter to the Governor and to the Council of Ministers that they would not support the current governing coalition anymore. Government thus lost its minimal majority backing of 11 seats in the 21-seat Parliament.

The Council of Ministers used article 53 of the Constitution to dissolve Parliament and called snap elections. It states that the Parliament may be dissolved by National decree, which also requires a new election and for the newly elected Parliament to meet within three months.

On the other hand, former Prime Minister Gerrit Schotte, who is the leader of the largest opposition party MFK, already indicated his willingness to form a new government with the support of “Korsou di Nos Tur” of businessman Amparo dos Santos, independent (former PAR) parliamentarian Eduard Braam, “Movementu Progresivo” (MP) of Marilyn Moses, and the two fraction members of PS for a majority of 11 seats. (letter new coalition)

However, the governor had already accepted the request for new elections, which means that Schotte’s effort to form a new government appear to have fallen short.

There is also an ongoing court case against Schotte for corruption, forgery, bribery and money laundering. Last year he was convicted and sentenced to three years in prison plus disqualification from standing for election.

However, he appealed and thus suspended the execution of the sentence, allowing him to participate in the last year’s vote. The next hearing is scheduled right before the new elections.